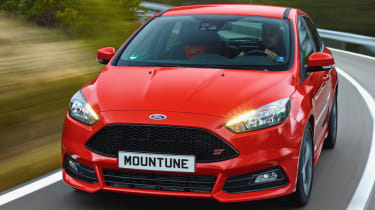 Diesel’s future looks as hazy as the emissions of a ten-year old Passat, but for a certain kind of driver the mixture of performance and frugality is still a useful combination. And they’re still very tunable, as evidenced by the latest package from Mountune for the Ford Focus ST diesel.

We’re more used to Mountune’s tweaks to Ford’s performance petrol models such as the Fiesta and Focus STs, and the Focus RS, but now the ST diesel is getting some love too, with a 20bhp increase in power - which should mean just over 200bhp compared to the 182bhp standard car - and a 37lb ft torque boost over the standard car's 295lb ft.

The upgrades have given resulting gains in performance, with Mountune claiming 0.7 seconds lopped from the 0-60mph time (7.4sec plays 8.1sec) and half a second off the 31-62mph figure, now 6.4sec. While that still trails the petrol ST (with its 6.5sec sprint, to 62mph at that), it’s a healthy increase even so. 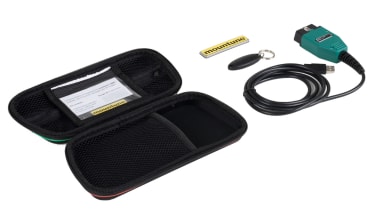 The kit is sold under the m460D banner and includes an OBDII cable, dongle, the performance calibration itself and a badge for the back of the car. Apparently, it doesn't interfere with any of the ST diesel’s standard functions - Mountune says it doesn’t affect the car’s standard DPF (diesel particulate filter) regen program, so you shouldn’t have emissions issues come MOT time.

The company also claims the kit not only makes the ST diesel quicker, but also smoother, and is focused on real-world performance - and having experienced previous Mountune-equipped Fords, we’d expect to see similar driveability.

The best bit is the cost though, as the improvements come about for only £429 if you choose to make the changes yourself, or even less - £350 - if you head to Mountune HQ in Brentwood. The cost difference can be explained by the DIY kit having to include the dongle and cable.