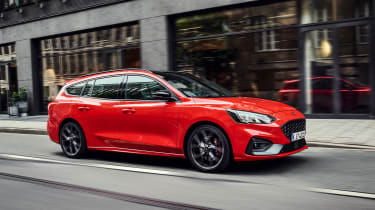 Prices for the hotly anticipated Focus ST have been revealed for the UK, starting at £29,495 for the five-door ST diesel hatchback. The 276bhp ST petrol will kick off at £31,995, more expensive than alternatives such as the Hyundai i30 N Performance and basic Honda Civic Type R (£29,495 and £31,550 respectively). But such is the upward progression of the mid-sized hot hatch, that’s still less than many core rivals cost such as the Volkswagen Golf GTI at £32,985.

The Focus ST is unusual in this class in offering estate variants, which ask an extra £1100 over the hatchback prices with either engine choice. Ford joins only Volkswagen, Skoda and SEAT in offering performance estates of this size.

The new Focus ST has a leg up on its predecessor, as this new model has inherited the latest Focus’s lower, wider and more dynamically capable chassis to support its new, more powerful engine.

Petrol versions are powered by a new-generation turbocharged 2.3-litre four-cylinder EcoBoost unit (up from two litres), producing a much stronger 276bhp at 5500rpm, with a whopping 310lb ft of torque between 3000 and 4000rpm. For comparative purposes, this is 50lb ft more than the Hyundai i30 N Performance – a rival hardly lacking in mid-range pull. The Focus ST diesel uses an uprated version of the standard Focus’s 2-litre EcoBlue unit, now producing 187bhp, with 295lb ft of torque available in the usually narrow rev band. 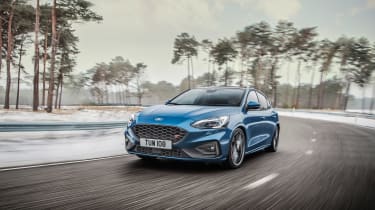 The new petrol engine is also full of performance tech, including the introduction of a new anti-lag system. The system builds from developments made with the Ford GT and F-150 Raptor, improving engine response by keeping the throttle open after the driver lifts off the accelerator, stopping the reversal of airflow from the turbo, which in turn keeps the compressor wheel spinning in the correct direction, thus improving response when the driver gets back on the gas. The new twin-scroll turbocharger, electronically controlled wastegate and unique low-pressure exhaust system all contribute to the new engine’s improved response too.

Both engines will be available with two different transmission choices – a traditional six-speed manual and a new seven-speed automatic, the latter differing from the eight-speed unit found in standard Focus models. Ford says the auto ’box is optimised for performance applications, and utilises a traditional torque converter – perhaps a good thing after Ford’s troublesome past with dual-clutch transmissions.

Helping to put the petrol ST’s generous outputs to the road is a new electronically controlled limited-slip differential – a first for a performance Ford. Sourced from Borg Warner, the new diff utilises hydraulic clutch plates to accurately distribute the torque between the front wheels, and it does this pre-emptively based on data gathered from a suite of sensors, rather than responding to wheelspin as in a traditional LSD. The new Focus ST also has a retuned steering rack, which is now 15 per cent quicker lock-to-lock, supported by unique steering knuckle geometry. The EPAS system has a built-in torque-steer reduction system, further helping the front wheels contain the chunky torque figure. The brakes have also been attended to, with bigger, 330mm front and 302mm rear rotors. Go for the optional ‘Performance Pack’ on petrol models and you’ll also get Ford’s CCD (Continuously Controlled Damping) set-up, an auto-blip function on the manual transmission, red brake calipers and a Track driver mode that unlocks a launch control function. 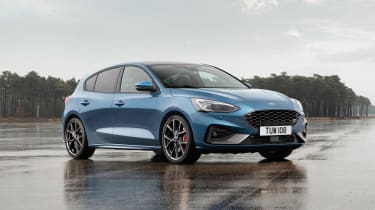 If you’re a fan of the Fiesta ST’s subtly aggressive detailing, you’ll like what’s been done with the Focus, as it shares many design elements with lesser ST-Line Focus models, but with a few key differentiations. Up front, Ford has opened up the upper and lower grilles to allow for more airflow into the engine bay, while redesigned sills, a larger rear wing and a new rear valance incorporating dual exhaust outlets harden up the curvy hatchback. New 18-inch wheels are standard fit, but optional 19-inch units wrapped in Michelin Pilot Sport 4 S tyres give the new ST a much tougher stance. Similarly subtle changes have been made inside, but crucial elements, such as the Recaro sports seats, a chunkier steering wheel and a new performance interface within the gauge cluster, with accompanying controls on the steering wheel, are welcome additions. Models fitted with the automatic transmission also gain steering-wheel-mounted paddleshifters.

This new Focus ST has undergone a thorough development process, and with the Fiesta ST proving such a hit, our expectations are high for this latest model. It’s perhaps the Focus’s more, er, focused basic underpinnings that should prove the biggest boon for this new ST, and with rivals from Hyundai, Volkswagen, Peugeot and Honda ruling the roost right now, the new Ford Focus ST looks primed to upset the status quo. It goes on sale this summer. Bring on the hot hatch megatest!