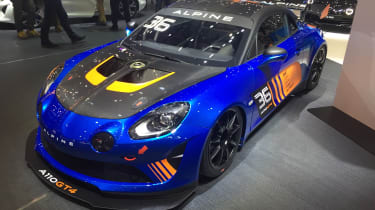 Few car manufacturers can boast a motorsport heritage quite as impressive Alpine – as well as numerous rally wins, the 1973 World Rally Championship constructors’ title, an outright win at Le Mans in 1978, it won the LMP2 class of the World Endurance Championship in 2016. It makes sense for Alpine, then, to take its new A110 to the track. It has already created a car for a one-make amateur series, the A110 Cup, but has decided to launch into the competitive area of GT racing.

At this year’s Geneva motor show, along with two new trim levels for its road car, Alpine has launched a GT4 race car based on the A110. The new competition car will go head-to-head with a vast array of GT4-spec cars, including Porsche’s Cayman GT4, BMW’s M4 GT4, Audi’s R8 LMS GT4, Ginetta’s G55 GT4 and Mercedes-AMG’s GT4. The car will be seen competing around the world in the SRO European GT4 Series, the international Creventic 24 Hour series as well as numerous individual events, including the Spa 24 Hours.

> Click here for our live coverage of the Geneva motor show

The Alpine A110 GT4 retains the same aluminium chassis, double-wishbone suspension and 1.8-litre turbocharged four-cylinder engine as the road car. The engine makes it one of only a few four-pot-powered cars currently eligible for GT4 races. However, don’t think that its engine might hamper it; Alpine say the engine has had ‘significant power upgrades’. The gearbox is not standard as it is fitted with a competition sequential gearbox. Oddly, the A110 race car still has the air-conditioning fitted making it perfectly suited for endurance races.

GT4 rules, like those for the GT3 and TCR championships, use a balance of performance method to level the playing field and make all the cars perform in a similar manner. That means, despite not having the same capacity as, say, a V10-powered R8 LMS GT4, the championship organisers will allow the Alpine’s engine to be tuned sufficiently enough to allow it to keep up with the field.

Still, the A110 GT4, thanks to its small size and light body, won’t need the same sort of power as the Audi to be just as fast, it’ll make up time in the corners. As well its natural advantage, Alpine has fitted the A110 GT4 with a wing, a front splitter, Brembo brakes and motorsport-specific springs, dampers and tyres.

Signatech has been entrusted with the task of developing, building and selling the A110 GT4, the company is also responsible for the single-make Cup car as well as Alpine’s LMP2 efforts. With both the A110 race cars built by the same firm, buyers have the opportunity to upgrade their Cup racers to GT4 cars.

The A110 GT4 will be ready to race in the second half of the 2018 season and will appear on the grids of a few select events. However, it will be with most customers by the start of the 2019 season.