We talk to the designer of Honda's latest concept, a 212bhp V4 engined car that spawned from an internal design competition 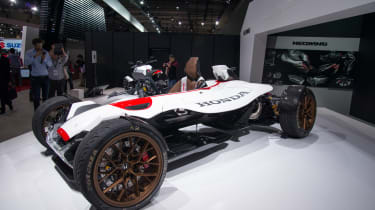 The 1990s saw an explosion of motorcycle engines in kit cars and lightweight sports cars, but beyond a hardy few that trend has more recently made way for downsized turbocharged powerplants, such as those in the KTM X-Bow and Zenos E10 S.

Honda though, as much a motorcycle company as it is a carmaker, has revived the motorcycle-engined concept with its latest concept car, the Honda Project 2&4, which has made its second public appearance at the Tokyo Motor Show.

Not just any motorcycle engine either, but a 999cc V4 lifted from the firm’s RC213V MotoGP bike, as ridden by Marc Marquez and Dani Pedrosa. While adapted for use on public roads, the tiny unit still develops 212bhp at a screaming 13,000rpm, and delivers its 118Nm of torque (at 10,500rpm) through a six-speed dual-clutch transmission.

The appearance too is inspired by motorcycles, with a visible structure below the vestigial panels, wheels and tyres barely sheathed by tiny fenders, and a surprisingly exposed seating position for the driver. With just one seat seemingly floating above the tarmac, it’s barely more practical than the motorcycle that lends its engine, either.

Honda says the styling also features inspiration from one of the company's best-loved forays into Grand Prix racing with the Honda RA272 of 1965. We're sure to see that particular car at Frankfurt alongside the Project 2&4 - it's become a regular at recent international motor shows.

The design is the result of an in-house Global Design Project competition that challenged more than 80 designers across the world. Honda’s motorcycle design studio in Asaka, with its car design studio in Wako, co-developed the eventual form, which is said to pair ‘the most thrilling elements of riding a motorcycle with the most engaging characteristics of driving a car.’ 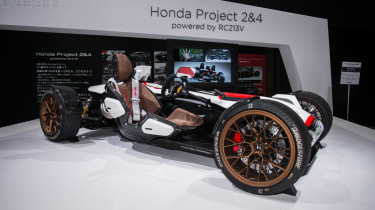 The Honda is lighter, however; just 405kg to the Morgan’s 525kg dry weight, resulting in a power-to-weight ratio of 523bhp per ton. That's 13bhp/ton more than a McLaren 675LT.

One of the most striking aspects of the concept is how closely it echoes one of Honda’s previous concepts – the Side-by-Side unveiled in 1997. Side-by-Side used a less extreme powerplant, with a 742cc V-twin, and put its engine beside, rather than behind the driver. 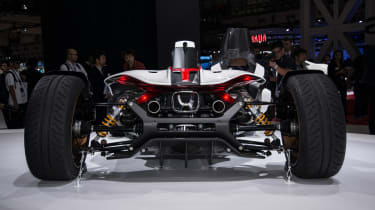 Honda actually made a limited run of the cars, with the intent of developing a racing series. That came to naught, but it was yet another example of Honda thinking outside the box with its automotive products.

With a new NSX on the way, the tiny S660 sports car in Japan, the new Civic Type R and Project 2&4 already with us, the future is looking bright for exciting Honda drivers’ cars.