The new Civic Type R is a huge step on from the previous car, mixing surprising refinement with genuine interaction and scintillating pace

Hear that? Thought not. It’s the sound of silence: the conversation on whether Honda can retain the traditionally manic character of its VTEC engines with the switch to turbocharging has long since fallen silent. We don’t care if this one goes bananas over the final 2,500rpm or not; we just want it to be the very best hot hatch it can be, full stop. Inevitably, in the 300bhp+ hot hatch class of 2017 that means a turbocharged engine, limited slip diff and a studious attention to aerodynamics. For Honda, it also means front-wheel drive and manual gearbox only, because, as its engineers say, this is fundamental to the DNA of a hot hatch, and, as they also admit, they don’t have a suitable twin clutch ‘box available.

What we also know is that this is a very different Type R project to the last one. Far from being tacked on to the end of the Civic product plan, this one was inherently part of it from the start. And what a start it’s had: lower, stiffer, and blessed once again with a multi-link rear axle (unlike the torsion beam of the previous FK2 model), it’s like beginning a recipe with home grown produce rather than a budget supermarket’s value range.

One of the few elements carried over from the old car is the engine and gearbox. The 2-litre unit now develops an extra 10bhp, mainly through work on the mapping side of things and reducing back pressure in the exhaust. Honda might not have chased the ultimate power output in the class, but let’s be fair, there’s nothing puny about 316bhp, particularly given that at 1,380kg the Type R is significantly lighter, for example, than a current Ford Focus RS (1,524kg). So despite the obvious disadvantage of three pedals and a gear lever versus a twin clutch ‘box when ranged against the stopwatch, and the traction limitations of front-wheel drive, the Civic’s 5.7-secs-to-sixty-two time is entirely respectable, and edges out a manual Seat Leon Cupra 300 by two tenths of a second. 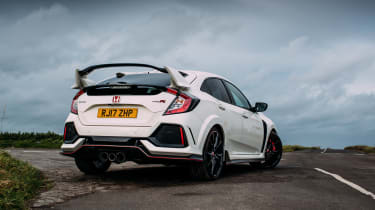 There wasn’t much wrong with the gearshift in the FK2 - it was one of our favourite aspects of the car - but it’s been further refined here with also a lower final drive ratio, and once again drive is then deployed through a helical limited slip differential to the front wheels.

Aero, and lots of it. Honda claims the FK8 is the only hot hatch to develop actual downforce, rather than merely reducing lift. You’d hope so, given the size of the rear wing.

The variable dampers now have three stages to their operation, tied to three driving modes: Comfort, Sport and +R. Honda say they have broadened the car’s talents considerably, increasing both ride comfort and improving track performance. For the latter, they inevitably point to the car’s record-breaking run recently at the Nurburgring Nordschleife, where it recorded a lap time of 7:43.8. 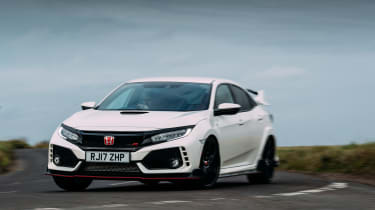 The body is 38% stiffer torsionally than the old car, with a lower centre of gravity, improved weight distribution and a lower hip point for the driver that improves the driving position. The body-in-white is 16kg lighter, despite the improvements to strength. Honda claims the specially developed Continental SportContact 6 tyre is a match for a Michelin Cup 2, and tyre width and wheel diameter has increased to 245-section and 20” respectively.

In short, nothing like what you’re probably expecting, at least initially. And why would you think any differently, when your eye is drawn to madcap elements like the Vortex Generators that jutt from the rear of the Type R’s roof like a bristling porcupine. However, it takes just a few hundred metres to feel the massive improvement in ride comfort compared to before. In this regard, the Type R is now no more difficult to live with than any other hot hatch, particularly when put in the Comfort setting, which allows the dampers a surprising amount of stroke to deal with poor surfaces. Sport is also well judged, but combined with much crisper throttle response, while even the +R mode is now perfectly useable on the road if you’re in the right mood. Sometimes - just for a moment - you find yourself forgetting entirely you’re driving something that looks quite so dramatic, it really is that much more refined in every respect.

The FK8 Civic’s interior is a major step on from the old car, and crucially for a hot hatch, all the really important interior bits in the Type R are spot on: great bucket seats, good pedal weighting including the brake, the tactile alloy gear knob and a lovely, slim, leather steering wheel. It’s an environment that immediately sets the right tone for driving.

All the laggy behaviour and awkward resonances of the old engine have been banished. It pulls cleanly and strongly from around 2,500rpm, then maintains that vigour unwaveringly to the 7,000rpm red line. The switch to a single mass flywheel (compared to the dual mass setup of before), along with the much improved calibration, means that throttle response is sharp, the revs rising and falling notably swiftly, for example, when the clutch is in. It’s an honest, energetic powerplant, with a breathy exhaust roar similar to an old Megane RS and no hint of electronic fakery to the induction rort. 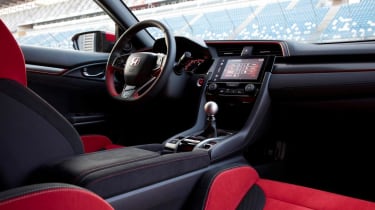 When you find the right road, and really go for it, the Type R’s character crystallizes into something viciously hard-edged. The steering is very precise, and the variable ratio now means steering is mainly via your wrists, rather than armfuls of lock. It’s not dripping with feel, but neither does it ever register as being a hindrance to establishing a good rapport with the car. It is now far more poised, and it is more stable, and ruthlessly fast across the ground, summoning tremendous levels of grip, turning in with real keenness and begging the driver to push harder. It does all of this yet combines it with the traditional thrills of manual cog shifting and busy footwork, because the best bits of the Type R are when you’re revving the blazes out of it, feeling the front diff working hard to distribute the torque and the only limit to the speed with which you heel and toe being the dexterity in your lower leg. It’ll oversteer on turn in if provoked with the brakes, but its default setting is grip, grip, and more grip. It’s a big car - every time I climbed out and looked at it, particularly in profile, it seemed more like a sports saloon than a ‘hot hatch’ - and occasionally it feels it, trading a smaller hatch’s hyperactive agility for a more grown-up effectiveness, but that shouldn’t be read that the experience is in any way dull. It’s a 169mph riot.

At £30,995 for the standard Type R, and another £2,000 for the GT model that brings extras such as sat nav, driver assistance systems and an improved hi-fi, the Type R is right in the thick of the hot hatch market’s more senior ranks, such as the £30,455 Seat Leon Cupra 300 and the ubiquitous VW Golf R at £32,965. We now wait to compare it on home soil with the best of the current crop, but one thing is for certain: the new Civic Type R is a far more convincing proposition than the old one and its rivals should be very worried indeed.