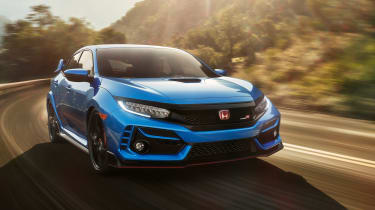 The Fk8 Honda Civic Type R has seen little in the way of updates since its 2017 release, but the turn of the new decade has brought about a facelift. Making its debut at the Tokyo Auto Salon, the 2020 model year Type R boasts tweaks to the interior, exterior and under the skin, for enhanced performance and efficiency.

Though the revisions are mild, both the front and rear have received adjustments. The front grille now sports a larger aperture for improved engine cooling and there are lower intakes that get a cleaner, more aggressive design - swapping mesh for a more aerodynamically-efficient insert with a body-coloured flick. Similar tweaks can also be found at the rear and there’s a new Type R-exclusive Boost Blue paint option.

The changes don’t stop there, as the interior takes on a new Alcantara-wrapped steering wheel, a restyled, shortened gear stick and ‘Active Sound Control’ for enhanced interior sound depending on the driving mode. The Honda Sensing suite of driver-assistance features is now included as standard, too.

Aside from the visual and technology enhancements, the Japanese marque has also treated the Fk8 to suspension tweaks, altering dampers for improved comfort, stiffening rear bushings for improved grip and fettling front suspension for better steering feel. The brakes have also been upgraded with new two-piece rotors and uprated pads. 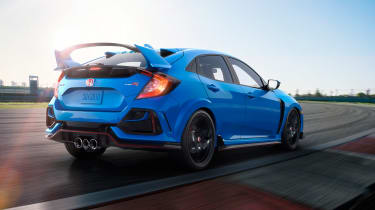 Powering the Japanese hot hatch is the same 2.0-litre, VTEC-equipped turbocharged 4-pot, putting 301bhp and 295lb ft to the front wheels through a 6-speed manual ‘box and limited-slip differential. Performance figures are expected to remain the same, with the 0-62mph sprint coming in a respectable 5.7sec, and top speed at just shy of 170mph.

Pricing is yet to be revealed, but further information is set to surface later this year.