The V8-propelled, luxury coupe will appear at this year's Pebble Beach Concours d'Elegance. 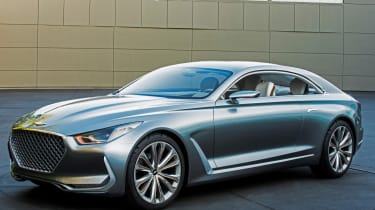 Hyundai has unveiled a concept car that previews a family of future premium vehicles, and is set to appear at the upcoming Pebble Beach Concours d’Elegance.

The Vision G concept is a two-door, four-seat luxury coupe, and was designed with input from Hyundai design studios all around the world.

While that would normally imply an uncomfortable mix of styles, coordination from Hyundai’s U.S. design office – and Hyundai president and chief design officer, Peter Schreyer – has led to a surprisingly cohesive product.

Actually, it’s not all that surprising – Schreyer has, in the past, led the design direction of Hyundai’s subsidiary Kia, and previously penned some of Audi’s most successful 1990s shapes, including the A3, A6 and most notably, the original TT.

‘The design [of the Vision G] is our interpretation of the idea that Hyundai breathes into all of its vehicles’ says Schreyer, ‘a DNA that balances design and performance with the idea that you don’t need to be over the top in terms of glitz and stereotypical luxury cues.’ 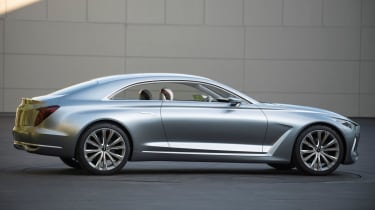 Hyundai’s designers have incorporated the notion of ‘chivalry’ into this design concept, suggesting design that doesn’t need to shout in order to be noticed and respected.

While the grille design is distinctly that of a modern Hyundai, several other elements of the car remind us of other luxury vehicles – the rear has more than a hint of S-class coupe, and the roofline isn’t dissimilar to the Rolls-Royce Wraith. Of course, these could be considered flattering comparisons for a company like Hyundai – which speaks of just how far the company has come.

It’s based on the unit found in Hyundai’s existing Genesis and Equus models, though it gains power in this application, and Hyundai claims a flatter torque curve and lower noise, vibration and harshness.