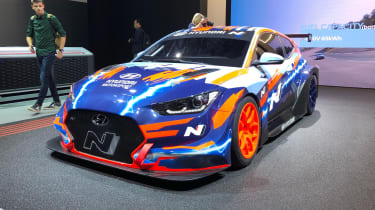 Hyundai has been busy of late and at the Frankfurt motor show it’s not only revealed its intriguing 45 EV Concept but has also pulled the wraps off its first-ever electric race car – the Veloster N ETCR. Hyundai is increasingly becoming a force to be reckoned with in the motorsport arena and its electric race car draws heavily on the looks of the conventionally powered Veloster N TCR touring car.

Externally both cars look very similar, with extended front and rear wheelarches, a front splitter and a large rear wing sprouting from the rear hatch. Under the skin though they couldn’t be more different, with the ETCR race car using an entirely different method of propulsion. Gone from under the bonnet is the 345bhp 2-litre four-cylinder turbocharged engine that drove the front wheels to be replaced by a mid-mounted electric motor driving the rear wheels – the first race car Hyundai Motorsport has built in this configuration.

Built to compete in the new ETCR series that’s due to join the racing calendar in 2020, the Veloster N ETCR has had a short gestation period. Design work at Hyundai’s Motorsport HQ in Alzenau in Germany began in November 2018, with the first shakedown runs for the prototype completed in August 2019. A full testing programme for the electric race car will start later in September with a view to having two Veloster ETCRs on the grid for the start of the 2020 season. 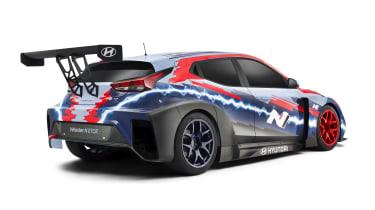 ‘Today, we have experienced another special milestone in the history of Hyundai Motorsport,’ said Thomas Schemera, head of product division, executive vice president of Hyundai Motor Group at the Frankfurt show. ‘We are proud to reveal the Hyundai Veloster N ETCR, our first electric race car, designed specifically for ETCR regulations. We have been anticipating this moment for some time and we are thrilled to open this exciting new chapter for our company. Through our successful Customer Racing division, we have spent many years honing our skills in touring car racing, which has resulted in two packages capable of competing for championships around the world.’

The electric Veloster is very much seen as a technology test bed for the next generation of Hyundai’s electric road car programme, with lessons learned from the race car being shared with Hyundai’s global R&D facility in Namyang, South Korea. ‘ETCR is the natural next step in our journey, and one that aligns perfectly to Hyundai’s global strategy for electric vehicle production,’ said Schemera.

Williams Advanced Engineering is to design, develop, manufacture and supply the 65kWh battery packs and vehicle control modules for the ETCR, the first electric multi-brand Touring Car racing series, and all manufacturers will use the same package. Currently both Cupra (with its e-Racer) and Hyundai have confirmed entries for the series. While Hyundai has yet to make any performance claims for its ETCR car, the Cupra e-Racer has been used as a reference machine for the series with a top speed estimated at 168mph and 0-62mph taking just 3.2sec. Don’t expect endurance race distances though as the 65kWh battery is said to be depleted after just 25 miles at full speed.