The newcomer to our Fleet, Jaguar's XF SV8, has been drawing admiring looks... 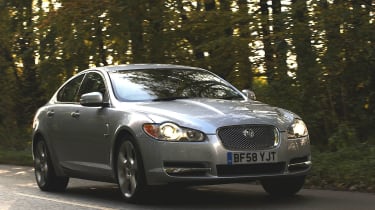 Three weeks in and I’m pretty much converted to the looks of the XF. It has some superb angles: dead side-on is especially good, with the flowing roof-line and bold wheel design. Externally, all that changes from the £33,900 entry-level model to the £54,900, 410bhp SV8 is the wheels, yet the huge 19in five-spokes transform the visual impact.

I really ought to reverse the Jag into the driveway at home so that I can stand at an upstairs window and take in the elevated rear three-quarters too – it’s another great angle. I have been less convinced by the front, though, the headlamps specifically, and requested our XF in ‘Liquid Silver’ to lessen their impact. Well, for that reason and also because I found the range of colours rather uninspiring.

The XF draws admiring attention, even if it’s not immediately obvious to some that it’s a Jaguar. ‘Nice car. Lexus?’ asked a trucker. It’s a dramatic change of direction for the company, and a very positive one too. The moment I fully appreciated this was when I pulled up to a roundabout and there in front was an S-type, in British Racing Green. Oh my. The arrival of a new model usually puts four or five years on the outgoing design in an instant, but when that car has ‘retro’ styling, that figure doubles.

The XF’s cockpit is a great place to be. I’ve really warmed to the design – the novel-looking gearlever that rises like a mini podium works well – and it’s comfortable and spacious too. Indeed, the rear seat is wide enough to take two kiddie seats and a booster, which means that for the first time in ages I’m running a car that the whole family can fit into. The boot is big enough to take their paraphernalia too.

From the XF’s short options list I selected the parking aid with rear camera (£395), DAB radio (£250) and the stereo upgrade (£890). I’m not an audiophile and the name Bowers & Wilkins conjured up images of an old-fashioned hardware store (until I realised I knew it as B&W) but the 13-speaker system sounds fantastic.

I knew this before the SV8 arrived, because for a few weeks beforehand I was running a 2.7 diesel XF in almost identical spec. It’s the most popular engine choice and I can appreciate why; over a few thousand miles it returned an average of 35mpg and for most of the time it’s refined and has as much performance as you want. It does come up short pretty quickly when you find yourself on a road that you really want to drive, though. The chassis is well up for it, but the twin-turbo V6 diesel struggles to invigorate it sufficiently, and this despite the sterling efforts of the outstandingly good ZF automatic gearbox common to all models.

The SV8’s supercharged V8 starts with an appealing rumble rather than a chesty rattle and it positively purrs along. It also has throttle response so immediate, so crisp after the diesel that’s it’s almost shocking. And, of course, if you keep the throttle pressed the kick in the pants remains insistent and exhilarating right through to 6000rpm. It’s just a pity that, as ever, it’s the whirr of meshing supercharger rotors that’s the dominant sound from the engine bay. If there was a sports exhaust that gave it a V8 voice I’d have one tomorrow. So much else seems so right that it feels like an oversight, but I’m looking forward very much to getting to know the XF SV8 better.