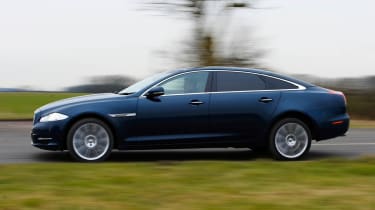 Make no mistake, the new Jaguar XJ is a very big car. The company expects most buyers will opt for the long-wheelbase version, too, and that means a car over 17ft long, putting executive car parks around the globe under severe pressure. The flipside is that you do get plenty of new Jag for your money. The range starts at £53,775 for the V6 diesel (0-60mph in 6.0sec, 184g/km) and rises to £90,455 for the full-fat, bells, whistles and supercharger XJ 5.0L Supersport (0-60mph in 4.7sec, 264g/km).

We’ve picked the XJ 5.0L V8 in £74,355 ‘Portfolio’ spec (‘well posh’ in other words) for our first drive of the new XJ on British roads, this model having come highly recommended as the pick of the bunch, dynamically speaking, by Jaguar’s core development team. Their reasoning is that the normally aspirated 5-litre V8 is actually the lightest engine in the range, which results in the chassis balance being damn near perfect.

Entry to the cabin is via Jaguar’s usual keyless-go technology. Inside, you’re met by an inky black instrument panel, acres of leather and a wonderful sweep of highly polished wood that runs along the top of the doors and over the dash, just beneath the windscreen. The rest of the cabin is more conventional but still beautifully finished in top-class materials.

Find the starter button (it’s hidden just behind the steering wheel) and, as the engine fires, the previously blank screen ahead of the driver springs into life: central speedo, rev-counter to the right, ancillary gauges to the left.

It works well, and the display’s appearance adapts to suit your chosen driving mode. So when you press the ‘Dynamic’ button the standard blue hue changes to a racier red. And when you elect to control the six-speed automatic gearbox manually, the chosen gear will appear in the left-hand dial, the other gears hiding behind, waiting for their turn in the spotlight. Welcome to the new electronic interface that is Jaguar 2010; it’s all very different to what went before.

What hasn’t changed is the delicious way the XJ slips its moorings and drifts into traffic. It’s the delicacy of all the major controls that allows it to behave like this. There isn’t a better advert for a conventional torque-converter auto gearbox, either. There’s no unseemly shuffling by a confused dual-clutch transmission with too many cogs to choose from here. Yet this exemplary wafting isn’t the XJ’s star turn. That comes as the sweeping road ahead clears and you can start to push the car a little harder.

It’s the way this XJ reacts to the first proper twist of the steering wheel that grabs your attention. Just as your brain is saying you’re in a monster limo so best go easy, the big Jag simply locks into the turn, hits the apex perfectly and then goads you to push harder next time around. The engine is growlier now, too; never intrusive but just letting you know you’ve got a V8 for company.

The roads are horribly greasy, but from where I’m sitting you’d hardly guess. The 20in Dunlop SP Sport Maxx tyres are finding grip where there shouldn’t be any, and the body control from the steel springs up front and air-sprung suspension at the rear is exemplary. In fact this has to be the best-riding Jag there is – never floaty, just beautifully controlled.

The reason it feels so good has a lot to do with the XJ’s weight, or rather its lack thereof. The kerb weight of the car I’m driving comes in at just over 1700kg. Compare that to 2070kg for a Merc S63 or 1990kg for the Maserati QP GTS and it’s obvious it’s this lack of bulk that gives the all-alloy XJ such dynamic alacrity. It’s lighter even than the smaller, steel-bodied XF.

The looks of the new XJ might take some getting used to, but all it takes is a spell behind the wheel to make you forget about them – the way it drives will simply seduce you. There might be plenty of established competition in this class but, if you enjoy driving, the new XJ is going to take some beating.