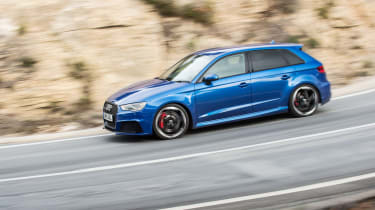 The new Audi RS3 was, for a brief period, the most powerful hot hatch ever built. Now topped by the 376bhp facelifted Mercedes-AMG A45, it no longer can rely on stats alone to sit at the top of the table. The RS3 utilises four-wheel drive and a twin-clutch gearbox to transform itself into a formidable cross-country machine, boasting enough straight line pace to trouble far more expensive cars.

That said, it was bested by a Golf R on track during testing and by both the Golf and the Ford Focus RS in our all-wheel drive hot hatch test in issue 220, both cars that are down on power compared to the Audi. It's a practical and usable car, but sadly it just isn’t as much fun to drive as a hot hatch should be on an engaging stretch of road, ultimately understeering where others share the load better between their axles.

The progress Audi has made between the previous RS3 and this one is notable, although it remains a slightly heavy-footed, uninvolving performance car compared to the best in class. The character and sound of the five-cylinder turbo engine is a highlight, though, and with an RS3 saloon on the way there'll soon be another dimension to the RS3's appeal.

Better to avoid optional fripperies like the £495 carbon fibre pack for the engine bay and £325 cost for the red painted brake calipers. Instead money is probably better spent on the comfortable super sports seats which cost £795. They add a bit more of that RS feel to the car which otherwise can appear little more than a standard S3 on the inside.

'This Audi lacks the piercing focus of the hardcore A45 AMG but is a more enjoyable, more rounded car and feels much less one-dimensional. On the ractrack it'll even allow you to throw it into corners in a deliberate near-spin and then pulls you clear in a cloud of smoke and a gale of laughs.

In fact, given the space to really take the RS3 by the scruff, it displays a really indulgent, fun side. It's a shame that for the most part on the road it feels just a little uptight. In summary, much better than the old car but nothing like as spectacular as the spec sheet suggests' - Jethro Bovingdon, evo 210 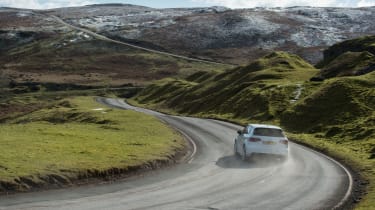 > Engine and gearbox - Five-cylinder turbocharged engine produces 362bhp, through a standard seven-speed dual-clutch transmission. Gearbox will hold your choice of gear, rather than changing up on the limiter. Read about the Audi RS3's engine and gearbox here

> Ride and handling - Better than previous RS3s, for which Audi should be commended. Unfortunately, it's not as involving as the cheaper Volkswagen Golf R also sold within the VW Group. Read about the Audi RS3's ride and handling here

> Prices, specs and rivals - Clocks in at just under £41,000, which puts it in Mercedes-AMG A45 and BMW M2 territory. Perhaps its best rival though - the Golf R - is ten grand cheaper. Read about the Audi RS3's rivals here

> Interior and tech - Won't wow in terms of the latest gadgets, but the tech that is included is well thought-out. As is the cabin itself, which matches Audi's typically high standards. Read about the Audi RS3's interior and tech here

> Design - If you're already a fan of the Audi S3 then the RS3 will certainly tickle your fancy, but as with all Audis, the styling is divisive - some will love it, others will find it wholly unimaginative. Read about the Audi RS3's design here

> Videos - We've got two videos of the RS3 so far, driving the car on its icy launch and pitting it head-to-head with the Volkswagen Golf R. Watch us drive the Audi RS3 on video here