With 270bhp on tap this re-engined Land Rover is one of the quickest Defenders ever - but is it any good to drive? 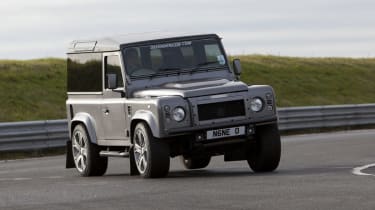 Firstly, and obviously, a Land Rover Defender – but one that’s been modified to deliver a driving experience that none of its standard sisters could ever get close to. Nene Overland has been tuning Land Rover products for years, and this Icon Sport Wagon is the pinnacle of its considerable expertise in go-fastering Defenders. Highlights include 270bhp and a sub-7 second 0-60mph time.

The standard Defender has been built to be very good at going off road, which is why it’s pretty abysmal on tarmac if you ask it to do anything more than trundle slowly. Nene has sought to create a car that keep’s a fair percentage of this base mud-plugging ability, but which is also capable of handling a near-tripling in power.

Pay enough money and Nene will fit pretty much any engine into a Defender, from a V8 downwards, but this Sport Wagon uses the company’s latest transplant – the fire-cylinder 3-litre turbodiesel engine that’s fitted to the new Ford Ranger pick-up. In standard form this produces 200bhp, but a reworked ECU has boosted output to around 270bhp, accompanied by around 500lb/ft of torque. (The numbers are imprecise as it’s yet to be strapped to a sufficiently brawny rolling road.) Dealing with that has meant using the Ranger’s beefier gearbox, which them mates to the rest of the Defender’s four-wheel drive powertrain.

Chassis mods include lowering the Defender by no less than three inches – which still leaves it with a usable amount of ground clearance. Springs are softer than those of the standard car, but the dampers are firmer and there are fat new anti-roll bars to keep everything in check. The track has been widened front and rear to accommodate 20-inch alloys, with AP racing discs and six-pot calipers at the front end to increase braking by a proportionate amount.

The Icon is almost comically rapid. The standard Defender is such a chugger that the rush of turbocharged torque that throws the Sport Wagon down the road feels pretty much ridiculous. Okay, so it’s probably no faster than a mid-spec hot hatch – but this is a Land Rover Defender, complete with a seven-foot eyeline and the same tight-fitting cabin. The engine comes on boost at around 1800rpm and stays firmly in the zone until around 4500rpm.

The rest of the chassis mods work to keep everything under control. It’s no sportscar, but it’s far better lashed-down and – more importantly – far more predictable than the standard Defender. Get towards the limits of an ordinary 90 and it often feels like it’s going to tip over – the Icon resists roll well and, thanks to the lower ride and wider track, steers with far more accuracy. Cooper LTZ tyres produce plenty of grip, and although the 90’s short wheelbase means the tail can get loose under hard braking, but most of the time it just sticks and goes.

There are plenty of other modified Defenders, of course – and we’ve already driven some of them. But the Icon’s level of performance does put it into a different performance league. You’d have to pay Nene around £19,000 for the new engine, £2500 for the suspension mods and another £2500 for the uprated brakes (including VAT) – and that’s on top of the cost of a vehicle to fit them to. But if you want the ultimate performance Defender, as unlikely as that sounds, then this is probably it.

The Icon is still pretty handy off-road, despite the dropped ride height. ‘Real world’ fuel economy is similar to that you’ll get from the standard car – around 28mpg when driven reasonably carefully. Nene will also sell a range of interior and exterior styling tweaks, including the dark privacy glass panels fitted to the rear of our test car.