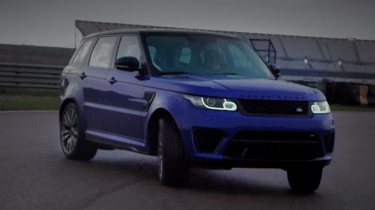 Two-tons of Range Rover Sport SVR being drifted around Rockingham Raceway is not exactly what the doctor ordered, but we'll take it. Proving that the magicians at Jaguar Land Rover's new Special Vehicle Operations unit know how to turn the big Landy into a proper performance car, Mike Cross, JLR's Vehicle Integrity Chief Engineer, decides to get properly sideways on camera.

We've already introduced you to the car here and confirmed its track credentials here, but just to remind you, it's powered by the RR's range topping supercharged 5-litre V8, and after some work it now produces 542bhp and 501lb ft of torque, making it good for a 4.5sec sprint from 0-60 and a a 162mph top speed. It's the fastest Land Rover, ever.

As explained by Cross in the video, the super-SUV is far from just an overpowered heavyweight, but instead benefits from some serious sporting expertise to become one of the world's most agile and playful 4x4s. It's certainly not the only one though, because as covered in evo 205 (out at the close of 2014), the Porsche Macan S, Audi RS Q3 and Mercedes GLA 45 AMG all fare pretty well on track.

We'll leave it to you to decide which would be the ultimate super-SUV.