The most broadly capable performance SUV on sale 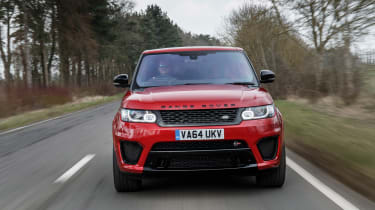 The Range Rover Sport SVR is the fastest and most powerful Land Rover ever. Cut from the same cloth as BMW’s X5 M and Mercedes’ ML63 AMG, the SVR is a performance SUV that carries with it some extraordinary numbers – more of which in a moment.

It’s also the first SVR-badged car to emerge from Jaguar Land Rover’s new Special Vehicle Operations division. The tag will denote the group’s most powerful and dynamic cars. JLR bosses liken the SVR range to Porsche’s 911 Turbo rather than its GT3 RS – power and performance rather than ultimate on-track ability, then.

Of course, it’s the same engine that powers the previous range-topping model, the Range Rover Sport V8 Supercharged, but with an additional 40bhp and 41lb ft of torque. 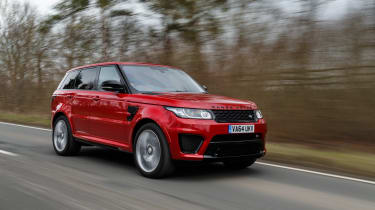 The most alarming figure of all, though, is 8min 14sec. It’s the SVR’s Nurburgring time – set on the optional 22-inch wheels and Continental ultra high performance rubber – which makes this one of the fastest SUVs of all time.

The gearbox is an eight-speed ZF automatic – the same one that’s used throughout the Land Rover and Jaguar model line-ups – and power, naturally, is delivered to all four wheels.

The full-throttle power and torque curves of the big V8 are exactly the same in this application as the F-type V8 R, but the calibration has been tweaked to suit this car. It rides 8mm lower than the standard model and although the air spring system is carried over – and hence the spring rate is unchanged – retuned dampers and stiffer bushings have made the suspension as a whole around 10 per cent stiffer. The roll control system now defaults to the base car’s stiffest setting, but the suspension geometry is unchanged.

By replacing the front fog lamps with vents and fitting a special carbon-fibre duct to direct air to the brakes, SVO’s engineers have managed to divert five times more cooling air over the brake system. The brakes themselves, though, are the same Brembo items that the donor car uses (380mm on the front). A torque vectoring by braking system has been added to help agility during more enthusiastic driving. 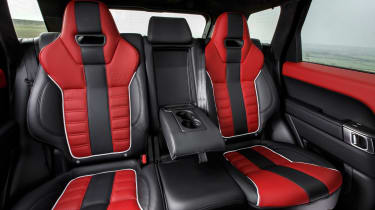 The level of assistance in the steering system has been wound down to give a sportier weighting and it gets heavier again in the car’s Dynamic mode. Overall, this is an exercise in tuning – particularly of the vehicle’s electronic systems – rather than a comprehensive reengineering project.

The standard wheel and tyre package is a 21-inch with mud and snow rubber. For £2400, though, buyers can opt for the 22-inch wheels with Continental summer tyres – which they shouldn’t hesitate to do, as we’ll discover.

Really quite impressive. There is a tension to the way the car rides over a bumpy road, but it’s far from being too stiff for daily use. The chassis revisions themselves are mild so you’ll have a job identifying this car from the standard model from the driving experience alone, but what does make an enormous difference is the optional 22-inch tyre.

Where the mud and snow rubber folds in on itself during hard cornering, robbing the car of precision and cornering grip, the Continental tyre is altogether more stable. It gives the car sharper steering response and more outright grip, too, which means it can actually cope with being hustled along a twisting road.

The key to making the most of the SVR is smoothness. With so much weight and such a high centre of gravity to contend with the car needs to be treated with patience – throw it into a corner and the sudden weight transfer will get the better of it and drag it into scruffy and unsatisfying oversteer, which the stability control system will hurriedly gather.

Pour it into a corner gently, however, let the forces build gradually and the car responds brilliantly. Driven in that manner it gets into corners very positively, it takes a set and holds its line rather than collapsing under its own weight and it even feels fairly neutral under power at corner exit. 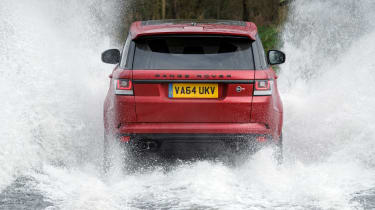 There is still a disconnect between the steering and the front axle around the straight ahead and over a cresting road the sheer weight of thing will overwhelm the suspension, but the SVR can be threaded along a road at an alarming rate.

The engine is a powerhouse – it’s also responsive and lively at the top end – and the gearbox is basically faultless in this application. The vocal new exhaust system makes the SVR sound like an F-type’s older brother, which is deeply amusing to an unintelligent motoring journalist.

What sets the SVR apart from other performance SUVs, though, is its off-road ability. Land Rover hasn’t completely forgotten its heritage with this new model – it will still cope with thick, wet mud, rocky streams and slippery inclines, even on those summer tyres. It really is a remarkable trick.

Okay, so the SVR doesn’t do the full knobbly-tyred Defender thing, but it goes places an X5 M could never dream of going. That gives it an authenticity and a range of ability that nothing else in this market can offer.

The BMW is just about the sharper and more agile of the pair, but how much dynamic ability do you really need from your SUV? We would rather the SVR’s respectable off-road capabilities and sacrifice the last tenth or two of poise and precision on-road.

The Porsche Cayenne Turbo is the best handling car in this segment and at £92,628 it just about undercuts the SVR. The Turbo S version holds the Nurburgring lap record for performance SUVs with a time of 7min 59sec – some 15 seconds quicker than the Range Rover – although that model costs £118,455.

Mercedes’ ML63 AMG, meanwhile, is a close match for the SVR in terms of performance and dynamics, but like the X5 M and Cayenne it offers none of the Land Rover’s off-road talent.

The Range Rover Sport SVR starts at £93,450, but we’d implore all buyers to fork out for the 22-inch wheels and Continental tyres (£2400). They add a great deal of dynamism on the road while retaining a reasonable amount of off-road ability.