Even more bold and brash than the standard SVR, which will surely appeal to some 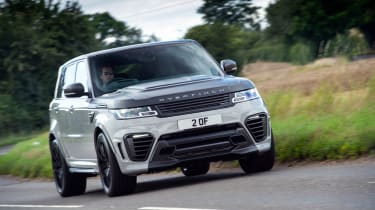 Exclusivity is hard to come by even in the world of luxury SUVs. Range Rovermight have laid claim to it once, but the roads are now awash with competitors from Porsche, Bentley, Lamborghini and even Rolls-Royce.

So how do you stand out? Well one option might be to knock on the door of a company such as Overfinch. The company has been around in one form or another since 1975, generally making wayward Land Rover and Range Rovers perform better, but always making them more exclusive. Just 25 examples of the Range Rover SVR-based Overfinch Supersport will be made.

A quarter-century ago Overfinch might have taken whatever was under the bonnet of a Range Rover and binned it in favour of a Corvette motor, but today you’ll simply find JLR’s familiar 5-litre supercharged V8 and eight-speed automatic gearbox in the Supersport. There’s little reason to mess with it, frankly – figures of 567bhp and 517lb ft of torque aren’t to be sniffed at.

As such, you can expect performance to more or less match that of the standard car, with 0-60mph arriving in a scarcely believable 4.3sec, and Overfinch quotes a top speed of 176mph. Overfinch does claim better breathing from its new carbonfibre airboxes, and from the titanium exhaust system, but actual gains should be fairly negligible. 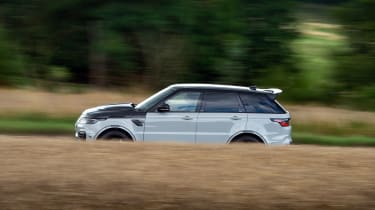 Predominantly the Supersport’s focus is on feel, so you’ll find no mechanical changes underneath. Wheels are 22-inch ‘Leggero’ forged items, an inch larger than the standard SVR rims but matching Land Rover’s optional 22-inch wheels, and the suspension is unchanged.

Brakes are upgraded though. Peer through the spokes of the front wheels and you’ll have no trouble spotting why: Overfinch has fitted enormous eight-pot Brembo calipers over the 380mm front ventilated discs.

Elsewhere, it’s all about the visual exterior and interior tweaks. The bonnet is an enormous carbon clamshell with an exposed weave, while the grille, side vents, side skirts, rear spoiler, and front and rear bumpers are also carbon, offered in different finishes according to the customer’s specification. Other details on this car include engraved exhaust tips and arch extensions.

Inside, the SVR’s bucket seats are retrimmed in quilted leather, though these too can be tailored at the owner’s request, while the seat backs get herringbone weave carbon shells. 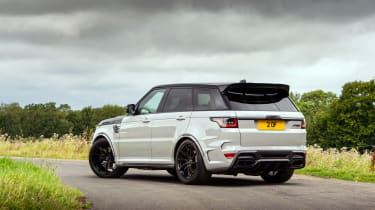 Rolling out of the Overfinch showroom on the edge of Regent’s Park might not be the typical start to an evo review, but it does give us a glimpse as to the life a good few of the 25 Supersports will probably lead. Large SUVs are objectively a poor choice for city driving, but subjectively there’s something to be said for the lofty driving position and imposing presence that seems to encourage those around you to take a slightly wider berth.

You get that with the standard SVR too though, of course. What you get with the Supersport is a slightly more enticing view out over the double-skin carbon bonnet, a touch of extra luxury from the retrim, and an ever-present growl from the titanium exhaust system that eclipses even that of the regular SVR.

It’s the sound that’s surely central to the Supersport’s appeal. Once free of the capital and with the engine warm, I give the pedal a poke. The thrust is no different from that of a regular SVR – though to be clear, the speedboat-style surge is never less than loopy – but the sound is quite remarkable.

Below about 4000rpm there’s a growl reminiscent of the standard car, but around this point it seems to switch, with a rushing air sound that’s part-hurricane and part-Mégane R26.R on steroids. Lift off at high revs and the exhaust pops and crackles like Guy Fawkes’ Night, but even if you’re rolling along gently you’ll hear gurgles and pops from the titanium system as you ease off the power. If the carbon intakes change the sound it’s not noticeable over the exhaust, though listen carefully during the rushing-air phase and you’ll detect a hint of supercharger whine. 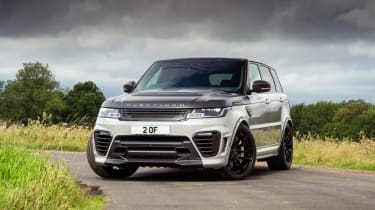 Handling is almost secondary in a car such as this, but here the Supersport retains the SVR’s impressive road manners. Air suspension takes the sting out of the 22-inch forged wheels – it’s firm, but not uncomfortable – and the 295-section tyres generate enormous grip for a car of this size and weight.

The steering is very light, but it just about telegraphs where that grip will eventually run out. Like the standard car though, the Supersport responds best to a smooth, measured driving style, which helps keep the body’s weight in check. The new Brembos prove powerful and have decent pedal feel considering how much assistance must be behind them, but clearly work hard – there was a strong smell of hot friction material in the air after just a couple of passes for the camera.

As each Overfinch Supersport is unique, pricing really depends on just how many boxes you tick and which elements you have tailored to your own unique specification. Brand new, our ex-demonstrator test car would have cost £259,990 all-in, though this very car is currently for sale at £209,990 with 3000 miles on the clock.

That’s over double the £101,810 Land Rover is asking for a new Range Rover Sport SVR. Still, what price exclusivity? Objectively, little really separates the Overfinch from the base car, so if noise, size and pace are your primary concerns, then the extra cash seems excessive, but there’s no doubt a select few will see the benefits.

This segment of the market is awash with cars you might consider competitors, even if you exclude variants from other tuning firms. A V8 Bentley Bentayga will set you back £136,900, the W12 £162,700 and the Bentayga Speed is £182,200. A Lamborghini Urus is £159,925, and going right to the top of the Porsche Cayenne tree – for a Cayenne Turbo Coupe – gets you more performance but comes in at little more than the base SVR, at £104,729.