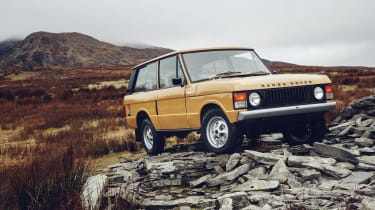 Jaguar Land Rover has dived deep into its heritage recently, producing continuation models of Lightweight E-Types and the XKSS, and the Land Rover Series 1 Reborn, and now the original Range Rover is the latest model to get attention.

Land Rover will present a comprehensively restored example of the original Range Rover at the upcoming Salon Rétromobile in Paris, with the promise to restore nine more initially - though unlike Jaguar's continuation models, there's theoretically no limit on the work Land Rover Classic will do should owners supply them with an original car.

The model presented at Rétromobile is based on a 1978 model, and has been completely restored to original factory specification from factory parts.

It wears a coat of oh-so-70s Bahama Gold paint (read: butterscotch), while the original 3528cc Rover V8 engine has been overhauled and should be developing its original 132bhp and 186lb ft of torque through a four-speed manual transmission. 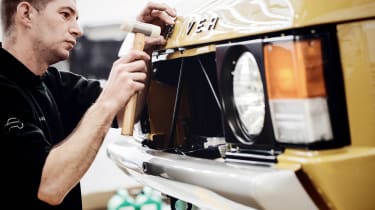 The company says it will advise customers on the most suitable base vehicles, based on collectability, any unique characteristics, and preferred chassis numbers, though in theory the sky's the limit. Well, price is probably a limit too, given prices for completed Range Rover Reborn restorations will start at £135,000. For reference, representative examples of early Range Rovers currently sell for anything up to £50,000.

Still, as Tim Hannig, director of Jaguar Land Rover Classic says, it's 'a wonderful way to preserve the much sought-after three-door original Range Rover from the 1970s', and with classic Rangies achieving ever higher sums, the cost of restoration may begin to look better value.

The 1978 car will be joined at Rétromobile by the first European presentation of the continuation Jaguar XKSS first shown at the Petersen Museum in Los Angeles, as well as a factory-restored 1962 E-type coupe.