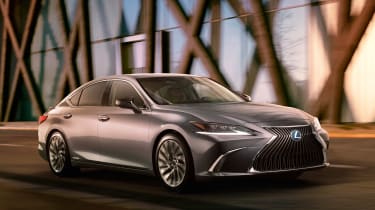 This is the first official image of the Lexus ES – a mid-size executive saloon set to make its debut at the Beijing Auto Show at the end of April.

If you’re unfamiliar with the ES nameplate then you’re probably reading this in the UK, where the model has never been sold – but the latest version may make its way here to replace the Lexus GS in the brand’s line-up.

That sets the ES up for an immediate challenge, as it’ll serve as competition for the Audi A6, BMW 5-series and Mercedes-Benz E-class. While the outgoing GS does that with a rear-wheel-drive platform, all previous ES models have been front-wheel drive, effectively based on Toyota’s Camry model.

With the ES expected to utilise Toyota’s TNGA modular underpinnings – which supports front-, rear- and all-wheel-drive configurations, though is most familiar to the current Prius and C-HR crossover – it’s as yet unclear as to which direction Lexus will go with the new ES, though front-drive is likely.

A range of petrol-hybrid powertrains is likely though, in common with other Lexus and Toyota models – to date, the upmarket brand has only offered one diesel model in the UK, in the second-generation Lexus IS.

Styling is an evolution of the company’s current design language and the early image suggests a shape very much like the larger LS luxury saloon, with slim headlights and a predictably dramatic interpretation of the firm’s 'spindle' grille design. 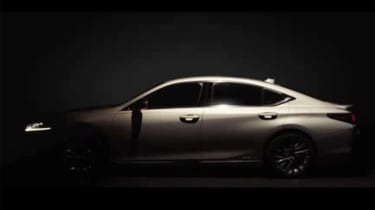 Lexus says the new car is ‘the product of a re-imagined luxury equation’, and that ‘engaging design, athletic performance and renowned refinement transform Lexus’s most popular saloon’. If it does make its way to the UK, we’ll be the judges of – though it’s sure to continue being a strong seller worldwide, with the current model sitting just behind the RX and NX SUVs in the brand’s sales charts.