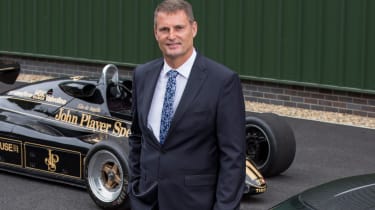 Having recently been responsible for the turn around of luxury yacht maker Sunseeker, previous to this role Popham was a senior executive at Jaguar  Land Rover overseeing the British carmaker’s most successful period of growth.

Under previous CEO, Gales, Lotus returned to profit before Geely bought parent company Proton in 2017. Popham will now be responsible for setting out and implementing Lotus’ short and long term strategy.

Within that strategy will be the need to replace both the Exige and Evora coupes and make a decision on the Elise, which under Gales was not expected to be replaced but continue as is. Now in its 22 year of production the mid-engined roadster is an icon of the company and still popular among customers – Lotus’ 911 if you will – and will need careful consideration as to its future.

But Geely won’t want Lotus to stand still with what it currently produces and will expect Popham to expand the company’s model portfolio. This will initially be address with an SUV that is expected to share components with Geely owned Volvo XC40 and XC60s and be built in China.

A new design centre in Coventry will also see the brand return to the Midlands (the M250 concept was designed there back in the late 1990s), with Popham also quoted in the Financial Times as having a desire to see Lotus return to frontline motorsport as well get on MI6’s company car list and offer its most reckless employee an alternative to his Aston Martin. The former we can get on board with, the latter less so. Either way, Lotus’ steady recovery continues, which is good news for all.