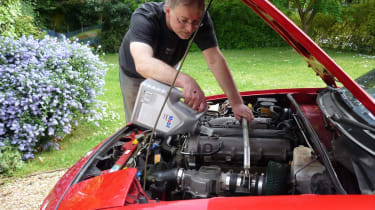 Bugatti Veyron costs fourteen grand to service. Back here, at the grubby end of the mag, I’ve vowed to run our ex-Grand Challenge MX-5 on roughly the cost of one of the Veyron’s dust caps, chiefly by servicing it myself. Talk, of course, is the cheapest thing of all – but with a week off work and nothing much to do, now was the time to grasp the nettle, or rather my newly purchased sparkplug wrench, and set about it. I mean, what could possibly go wrong?

As well as an oil and filter change, I’d decided to treat the little roadster to a new set of sparkplugs and leads. So I logged onto the MX-5 Parts website, where I discovered that what I needed was a set of NGK long-reach plugs and Magnecor Electrosports 80 ignition leads. While I was there I also ordered the oil filter, a new fuel filter, and, because the bonnet prop was rattling around, some new clips to hold it in place. The whole lot came to £85.05 and arrived the next day. Also in the post was a package from Haynes – I’d intended to buy one of their traditional manuals, but then I discovered they also did a book called Do It Up! Mazda MX-5: A Practical Guide to Renovation on a Budget, packed with colour photos and lots of sensible advice for amateurs like me, and priced at £19.99. How could I resist? I laid out all my new purchases on the drive, wheeled out my old trolley jack and newly purchased axle stands, and got stuck in.

MX-5s are supposed to have an oil change every 3000 miles. I wasn’t sure how many miles had elapsed since JLB’s last one, but I did know that it had been about eight months so it was probably well overdue, a suspicion confirmed by the thick, black gloop that chugged out when I released the sump plug. On went a new filter, and in went about three and a half litres of Mobil S semi-synthetic (£19.56 for 5 litres on special offer at Halfords).

The plugs were a doddle too, and the racy-looking blue leads looked terrific. Changing the fuel filter, however, was an absolute sod. Lying on my back, scrunched up under the back of the car with petrol trickling down my arm, I suddenly wished I was paying someone else to do it. Which made it all the more satisfying when it all went back together, fired up and ran beautifully.

It’s great having the little Mazda to blat around in. And the fact that it has still cost well under a grand makes it all the sweeter. When I’m out driving on a warm summer’s evening and I see big Mercs and BMWs hum by, their drivers cocooned from all the sensations of internal combustion and meshing gears and rubber treadblocks nibbling at tarmac, I know where I’d rather be.

It’s a bit of a bugger, then, that JLB has developed an intermittent starting problem. Sometimes it fires instantly; other times it takes three or four goes. Knowing Mazdas, this is probably the first time anything has gone wrong in 155,000 miles, and it happened just after I’d serviced it – as has been pointed out to me by Mrs Tomalin, though no more than three or four times a day…