Deep regrets as out MX-5 moves on. The simple fact is, you really can’t buy more fun for a grand 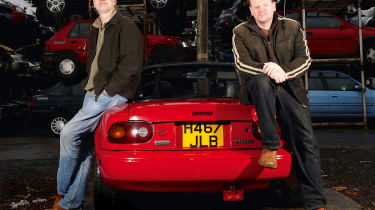 Buy a convertible for £1000 or less – that was last year’s evo Grand Challenge. In fact the only real challenge, certainly as far as team-mate Roger Green and I were concerned, was finding a fit MX-5 before the other buggers did. And through a mixture of luck and low cunning we managed it, bagging a 1991 Japanese-market Eunos Roadster from a dealer on eBay for the less than grand sum of £801.

Obviously it would have been lunacy to buy it without so much as a test drive. So let’s just say we got really, really lucky. When we turned up with the readies we discovered that the MX-5 we’d just bought wasn’t only sound of body and in rude mechanical health, it even had some tasty extras – front strut-brace, uprated anti-roll bars, poly bushes, pukka rollover bar – and four matching Toyo Proxes. On the drive back to the office I decided that, providing it survived the various trials and tribulations that we’d lined up for our four Challenge cars, when the story was done and dusted I’d buy it. Which was exactly what I did.

It really was a cracking little car. When we rolling-roaded it we found it was still pumping out 106bhp, just 9bhp down on what it should have had when new, and at Bruntingthorpe it hit a remarkable 117.4mph (more than 3mph up on the manufacturer’s figure). Best of all though was the drive to Land’s End (evo 130). On the tumbling, twisting Cornish lanes it was an absolute joy, communicating every little slip and slide, steering with a clarity and immediacy that you’d struggle to match in any car, at any price.

And come March it was mine, or rather ours, because Mrs Tomalin would be using it too, every day when the weather got warmer. We became absurdly fond of it, so much so that we bought it little presents – like a new leather gearlever gaiter and some chrome rings for the dash vents. I even serviced it – new plugs, leads, oil, oil filter and fuel filter – which immediately and perhaps inevitably triggered an intermittent reluctance to start. In the end I changed back to the old plugs, which cured it instantly. Otherwise it ran perfectly all summer, using very little oil and consistently returning around 30mpg. It did blot its copybook one other time, with a sticky front brake caliper, but as I had to keep reminding myself, it was after all an 18-year-old, 150,000-mile ragtop. Had it been one of the classic British sports cars it so artfully aped, it would almost certainly have been an oil-piddling rust-ridden moneypit.

So why did I sell it? People who write about fast cars for a living are, it almost goes without saying, lucky sods. There’s a different car to drive almost every day, which means that even a toy like the MX-5 is always in danger of being neglected. Every time I drove it I loved it, but those times became increasingly few and far between, and with Mrs T going back to her admittedly rather more practical Subaru wagon, the little red roadster was spending too long just being red and pretty on our driveway. Plus, we needed some dosh. So one night I decided to stick it on PistonHeads, and, in the spirit of the Challenge, I asked a grand. I figured that I’d had a summer’s free motoring and now it was someone else’s turn.

By the following morning my inbox was inundated. Among the interested parties, three offered to transfer the full asking price to my bank account that very day without even viewing the car. One was from Finland; said he’d fly over that weekend. But the very first person to reply was a guy called Rob Arbuckle, who lived slightly closer, 40 minutes down the M11 in Saffron Walden. So I gave him first refusal. When Rob turned up with his dad it emerged that he wasn’t even a regular evo reader; he just happened to be browsing the web when I’d posted the ad. Still, he loved the car, handed over the readies and drove off a happy man. Leaving me feeling strangely empty and not a little regretful. Because the simple fact is, you really can’t buy more fun for a grand.