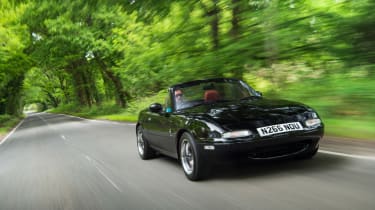 Bruce Southey grimaces when I tell him it looks as though there’s plenty of space around the chunky-looking V6 sitting under the bonnet of his Mk1 MX-5. Appearances can be deceptive: a phrase that neatly illustrates both the difficulty Bruce and business partner Tom Bullick have had in squeezing the Jaguar unit into a small Japanese roadster, and the character of said roadster when equipped with the aforementioned V6.

Rocketeer, the name of Bruce and Tom’s company, speaks of men in sheds, experimenting, engineering, so it’s ironic that, given Bruce’s day job as a user experience designer at Ford Motor Company, his design methodology is a long way from scratching around on a draughty driveway. 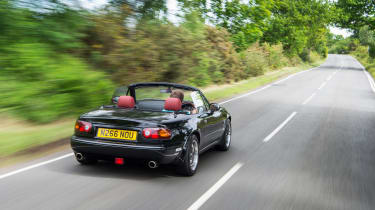 As tested there are six individual throttle bodies nestling within the 60-degree vee, but the finished product available now instead features a pair of carbonfibre intake plenums that will get even more from the V6 than the 230-ish crank horsepower of the car we drove. Without room under the bonnet to breathe, the throttle bodies aren’t the most effective solution. The plenums are the result of much CAD experimentation, subjecting them to CFD analysis, and rapid prototyping on a 3D printer to get the best possible under-bonnet fit.

The engine itself is a 3-litre Jaguar AJ-V6, a derivation of Ford’s contemporary Duratec unit. It was engineered in conjunction with Porsche, uses forged connecting rods, one-piece cast camshafts, and solid rather than hydraulic tappets. More importantly, it has an aluminium block, in contrast to the iron block of the original Mazda four-cylinder. Bruce says that, shorn of its ancillaries, the AJ-V6 is actually 5kg lighter than the 1.8-litre Mazda unit.

Rocketeer tried the Jaguar manual gearbox, too – as found in base-model S-types, which are cheap and plentiful, making them an ideal donor for the conversion –  but the Mazda gearbox is actually more than up to the task of handling the power (Bruce notes that the firing pulses of the V6 are easier on gearbox internals than those of a four-pot). The car is currently running a five-speed unit, a recent change from Mazda’s six-speed; Bruce thinks it’s a sweeter ’box. Final drive is 4.1:1, the same as a 1.8-litre MX-5’s, but a longer, more motorway-friendly differential is being considered for production. 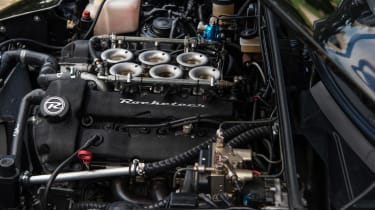 Rocketeer has kept the exterior and interior of its demo car largely standard, so prospective punters can concentrate fully on the new powerplant. The V6 takes a moment to catch and in this pre-production phase it’s a little unhappy when cold or on very light throttle openings. But damn does it sound good, with a rich, throaty note.

Every slightest movement of the throttle pedal, once past the initial stutter, results in instant response. Tom says the plenums may dull this slightly, but the trade-off will be perfect manners at low revs and more power at the top end. Today’s limit is around 6000rpm but even that’s enough to give the growling MX-5 ample pace, with one of the best soundtracks I’ve heard from a car in years.

Best of all, it doesn’t detract from the MX-5 one jot. The lightweight engine means handling is effectively unchanged – though your ability to play with the car on the throttle rises exponentially – and despite the extra performance it doesn’t overpower even the standard MX-5 chassis. Enjoy the car’s natural balance; be a bit silly; rumble around all day in fifth on the extra torque; the choice is yours. 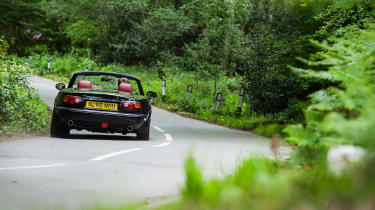 At £7194 for the conversion it isn’t cheap, and to that you must add the cost of a donor car – £3000 and up for a good one these days – and sourcing the V6. But for the quality of the components and the experience the end package is fantastic value.

You could feasibly have an absolutely immaculate car for around £15,000, or several thousand less than the cost of a brand new 1.5-litre, four-cylinder Mazda MX-5. Less still than the 2-litre car, a model that still has around 100bhp less than Rocketeer's conversion.

On the other hand consider it a low-budget alternative to the increasingly popular modernised classics from companies like Singer, Alfaholics, Eagle and Frontline. The MX-5 doesn't quite have the cachet of some of those cars just yet, but the same spirit of modernised performance with classic looks is present and correct.