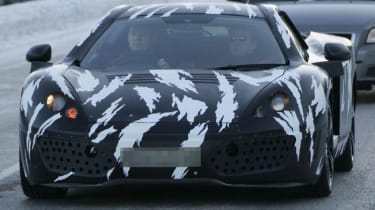 McLaren’s all-new supercar has been spotted out testing. The long rumoured Ferrari F430 rival – codenamed the P11 – will be a different animal to McLaren’s last two road cars, the superlative 240mph F1 and SLR that was co-developed with Merdedes.

Like the SLR it will use a V8, but that’s pretty much where the similarities will end. The P11 will be more about small supercar-baiting, with the car’s closest rivals likely to be the Ferrari F430, Lamborghini Gallardo and Audi R8 V10.

For that reason expect around 550bhp to provide some stern competition to the Europeans, with a low target weight of around 1200kg to maximise performance. A semi-automatic paddle-shift transmission is likely while the car will be mid-engined and rear-wheel drive. The side profile shots of the P11 mule show proportions similar to those of the McLaren F1, and although it is a very heavy disguise, expect influences from the most iconic of supercars to feature on the P11.

It’s due an unveil later in 2009, with sales to start a year later. It should cost around £150,000, although there are scant details confirming specification at the moment. Keep your eyes on evo.co.uk for the latest developments on Britain’s all-new supercar.