AMG’s next Black Series model to pick up elements from the new GT3 racer, including that grille 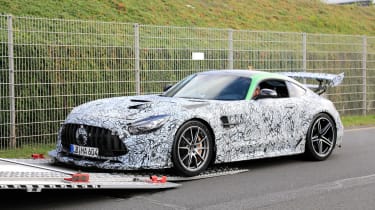 The new Mercedes-AMG GT R Pro might only have just hit the road, but an even hotter version, one likely donning the return of the Black Series nomenclature, is soon to join the range next year.

Spotted here on the roads surrounding the Nurburgring, this prototype clearly features new bodywork derived from AMG’s 2019 GT R GT3 racer, complete with a new front grille that dominates the entire front bumper. There’s also a new bonnet that features both a forward-facing intake as well as heat extraction vents similar to what you will find on AMG’s GT3 racing car. 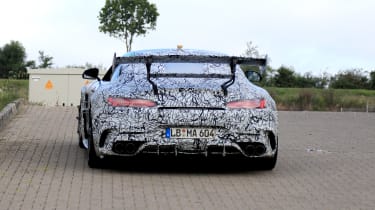 And then there is the Black Series’ most dramatic feature - the double-layer rear wing that sits nearly as tall as the GT R’s roofline, will undoubtedly generate even more downforce on track than that of the Pro. Under the wing is a new diffuser, with four round exhaust pipes that replace the standard car’s triple exhaust setup.

Given that the AMG GT C and GT R models both already feature a wider body than the standard GT, this new Black Series will likely miss out on a bespoke body shell, but with all of these aero additions it shouldn’t be difficult to pick out the new GT R Black Series from its more demure stablemates. 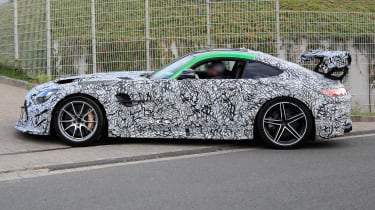 This will be the first Black Series model to feature a turbocharged engine since the SL65 Black Series of 2008, and the first with AMG’s 4-litre hot-V V8 engine too. As a result, the GT R Black Series will include a considerable rise in power over the current GT R’s 577bhp. The most recent Black Series model, the SLS, featured a 69bhp increase over the 563bhp AG SLS base car - a jump we’d suggest wouldn’t be out of the question for the GT R Black. If not more, considering the former was still running a naturally aspirated V8.

As with most Black Series models that have come before, this one will likely be the beginning of the end for GT production when it debuts next year, with sales following in a limited production run. All of which should see the current AMG GT out till early 2022. The way the industry is currently headed, this could also be the last AMG Black Series model not to feature some form of electrified powertrain. 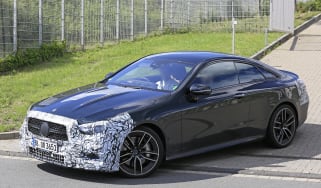