Sitting between the current '43' and '63' AMG models, the new 53 features a turbocharged, hybridised inline-six cylinder engine 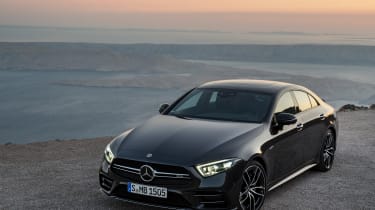 Mercedes-AMG has just launched a brand new twin-turbocharged, hybridised straight-six engine to be fitted to the CLS and E-class coupe and cabriolet. To utilise the ‘53’ nomenclature, it represents the beginning of a brave new world of hybridised engines for AMG, and won’t be the last either.

Detailed at the Detroit Motor Show, the new 429bhp petrol engine features the company’s EQ Boost starter-alternator (a combined starter motor and alternator) in an electric motor that’s installed between the straight-six petrol engine and an AMG Speedshift TCT 9G transmission. The electric motor generates the additional 21bhp and 184lb ft of torque, the latter combining with the internal combustion engine’s 383lb ft.

The 3-litre in-line six is equipped with two-turbochargers – a conventional exhaust gas turbine and an electric turbocharger. The latter not only charges the electric motor through the car’s 48 volt electrical system but also provides near instantaneous maximum torque from idle to eliminate any lag until the larger exhaust driven turbo is up to speed. 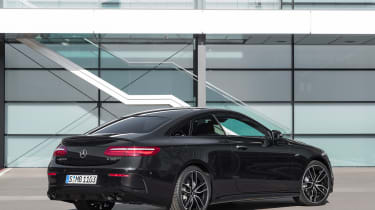 When installed in the new 1980kg CLS, the 53 engine results in a 4.5sec 0-62mph time and a 168mph maximum if the optional AMG Driver’s pack is ordered (it’s a plain 155mph if not). In the new E 53 coupe and cabriolet the numbers are 4.4 and 4.5sec respectively with the same top speed options. At the introduction of the 53 engine Mercedes confirmed there will be no CLS 63 or E 63 coupe or cabriolet model.

Mercedes’ EQ Boost technology is pivotal to the car’s 48 volt electric system, not only taking on the role of the car’s alternator but is also key to the model’s hybrid functionality, such as the engine’s idle speed control, a first for Mercedes. Along with the 21bhp and 184lb ft of torque produced by the electric motor, the hybrid function of the car also takes care of energy recuperation, gliding mode and the engine’s stop/start system which, Mercedes claims, is virtually imperceptible in operation. 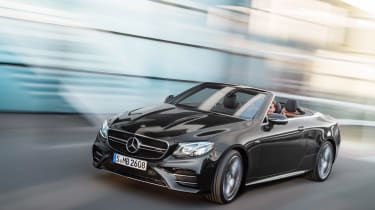 In developing its latest EQ Boost technology the engineers have been able to remove the ancillary belt driven components normally fitted to the front of the engine, freeing space allowing all but the exhaust’s particulate filter system to fit within the engine compartment improving thermal efficiency.

The nine-speed AMG Speedshift gearbox and 4Matic+ all-wheel drive system are standard on all 53-engined models. While the latter continuously monitors traction and grip across both axles and each driven wheel allowing it to run in fully four-wheel drive or rear-wheel drive, unlike the E 63’s driveline you cannot turn all the driver aids off to create a 450bhp rear-wheel drive saloon-coupe.

AMG Dynamic Select and Ride Control+ suspension is also standard on the CLS 53 and E 53 models. The former offers five driving modes: Eco, Comfort, Sport, Sport+ and Individual with all featuring different characteristics for the engine, transmission, suspension and steering, with the latter setting allows you to cherry pick your preferred set-up.

AMG has further tuned the company’s air suspension along with the 53 model’s chassis, too. There are new steering knuckles and load-bearing joints with every other component further optimised for improved rigidity. There is also more negative camber on the front axle and multi-link rear axle to sharper the dynamics. AMG’s electromechanical steering is standard across all 53 models. 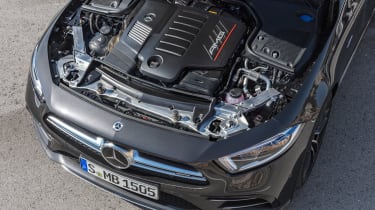 All 53-engined models are equipped with four-piston calipers and 370mm front discs, with a 360mm disc at the rear with a single piston caliper.