The new A-class L saloon may be for Chinese consumption only, but it’s a hint at the Euro-spec A-class saloon we’ll get later this year 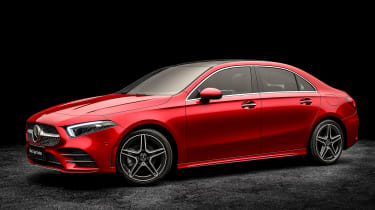 Mercedes-Benz has revealed the new A-class L saloon at the Beijing motor show a longer four-door version of the all-new A-class. Designed specifically for the Chinese market, the A-Class L might not be coming to the UK, but we have plenty of reason to believe that a standard-length saloon will be heading our way later in the year.

The A-class L saloon is identical to the hatch from the b-pillar forwards. This means the same narrow headlights and low-set grille dominate the face. It does have a new bonnet, subtly housing two longitudinal bumps, not unlike the ones found on various AMG models, and indeed the previous CLA. Further back the bodywork remains entirely conventional, with a more traditional three-box silhouette than the swoopy CLA. This has been done to maintain rear head- and leg-room (crucial factors in the Chinese market) as well as generate an extra layer of differentiation between it and the CLA.

Inside, the A-class saloon shares the same interior as the hatch, packed with new tech and minimalist design. Central to this is the A-class’s new MBUX infotainment system, based around a bank of two screens that form the system’s user interface.

Under the skin, the A-class L rides on the same front-engined front-wheel drive chassis, but with an extra 60mm of wheelbase compared to the hatch. We expect the European saloon will keep the shorter wheelbase from the hatch so as not to encroach on the CLA and C-class  in terms of interior accomodation. The engine range is also likely to mimic the hatch, so that’ll mean a combination of four-cylinder petrol and diesels. Dual-clutch gearboxes, and all-wheel drive will also be available on higher powered models. Mercedes-AMG’s incoming A35 and A45 performance models are expected to be available in four-door saloon guise too.

And where does the new A-class saloon’s arrival leave the CLA four-door coupe? We understand that the incoming European A-class saloon will not be replacing that car, instead occupying the space below it and giving Mercedes a direct rival to the Audi A3 saloon. As a result, the new CLA will grow in size and ape the new CLS’s svelte body-styling, closing the gap between it and the larger C-class. It will still be built on the A-class’s chassis though, so if you were hoping for the new CLA to turn into a rival to the Audi A5 Sportback and BMW 4-series Gran Coupe, you might be disappointed.

The European A-class saloon will be revealed later in 2018, with prices likely to be slightly higher than for the current hatch. The CLA will follow in 2019, along with other members of the new A-class family including a replacement version of the B-class, a new GLA compact SUV and, finally, another, more family-orientated SUV likely to be called GLB.