Following a price hike for the entire range earlier this year, pricing for the range-topping GT R Pro has been announced

After revealing its updated GT Coupe and Roadster at last year’s LA motor show, Mercedes-AMG has now released UK prices for the entire range. GT, GT S and GT C versions are available to order now in both body styles, with the first cars set to arrive with customers in May this year. Starting from £188,345, the GT R Pro is also available to order now, with deliveries beginning in July.

Starting at £104,130 for the basic GT Coupe, with the equivalent GT Roadster from £115,730 – both around £4k more than the outgoing versions – prices currently stretch up to £144,230 for the GT C Roadster. For the extra cash, the refreshed Mercedes-AMG GT gets updated looks, tweaked chassis and upgraded technology. The engines, however, remain unchanged, with the same line-up of ‘hot-vee’ twin-turbo 4-litre V8s continuing, with 469, 515 and 549bhp respectively for the GT, GT S and GT C.

> Click here for more on the AMG GT Four Door

External changes are subtle, with all versions receiving a revised nose with headlamps influenced by the recently launched AMG GT 4-Door, while at the rear there’s a new diffuser with either quad-exit circular or trapezoidal tailpipes depending on the model. Inside there’s now a configurable TFT dial pack as standard, plus the addition of the slick-looking transmission tunnel controls that debuted on the 4-Door. The steering wheel is now the better looking, too, being the nicer to hold, three-spoke affair already seen on the latest Mercedes-AMG C63. 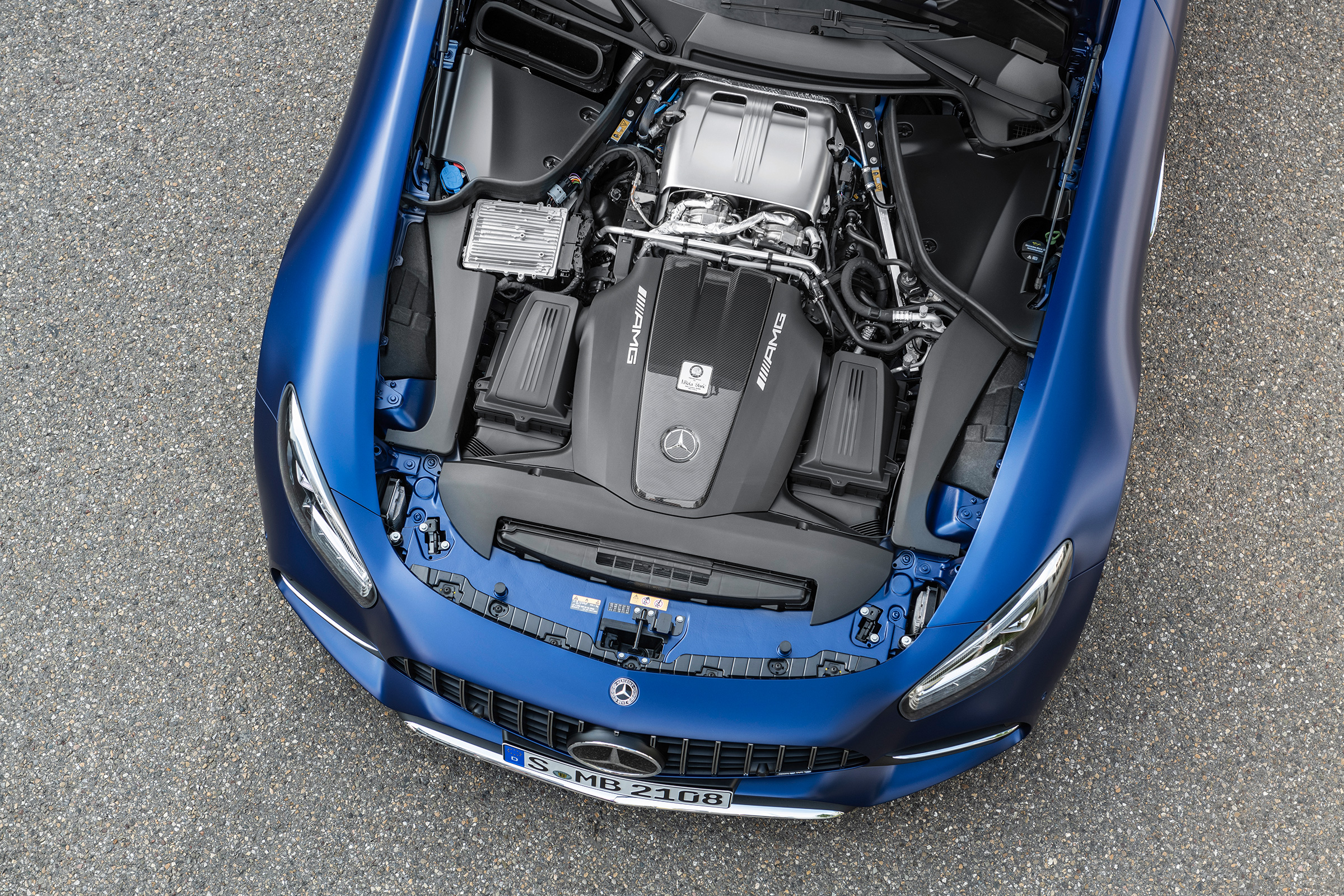 Yet it’s the  GT R Pro model that really grabs the attention. Based on the ‘standard’ GT R it gets the same twin turbo 4-litre (577bhp and a thumping 516lb ft) and seven-speed twin-clutch transaxle, but the rest of the car is even more extreme. Visually it won’t be hard to pick the Pro out in a crowd, what with its large rear wing on stilts, and its bespoke turning vanes, front splitter and rear diffuser (those last two items supported by milled aluminium brackets), which are all finished in carbonfibre. The lightweight material is also used for the roof panel, fractionally lowering the centre of gravity.

Other notable changes include the addition of large vents cut into the top of the front wings that help reduce front-axle lift, and a distinctive chequered finish for the backing of the ‘R’ badge. Inside there are carbon-shelled seats for the driver and passenger, while the optional Track Package follows Porsche’s Clubsport offerings by adding a half roll-cage, four-point racing harnesses and a fire extinguisher.

It’s the suspension that’s really been given a thorough going over, with the emphasis on adjustability for track work. That means there’s a coilover set-up with dampers that can be manually adjusted for bump and rebound, while at the front is an adjustable carbonfibre anti-roll bar (the rear end is similarly tuneable but gets a hollow steel tube component). Like the R, the Pro gets uniball spherical bearings for the rear axle’s lower wishbones, but it goes one stage further with a similar arrangement for the upper links, further improving precision. It all appears to work, the Pro lapping the Nürburgring in 7 minutes 4.632 seconds.

> Click here for the latest on the new Porsche 911

For the rest of the line-up the dynamic changes are much more subtle. Optional forged alloys wheels are now available across the range, but it’s the changes to the electronic systems that are most far-reaching. As before there’s a choice of Slippery, Comfort, Sport, Sport+, Race and Individual driving modes that alter the steering, throttle, gearbox and stability control mapping to suit your mood and the road, but this AMG Dynamic Select set-up has been enhanced. Essentially an extension of the ESP, active steering and differential, it can fine-tune and even anticipate vehicle movements. Working within the standard driver modes, it offers Basic, Advanced, Pro and Master settings (that last option only featuring on C, S, R and R Pro models) functions that gradually ramp up steering response and reduce stability control interference yet also actively add torque feedback to the wheel, much like the similar system used by Ferrari, helping guide the driver to deliver the correct input for a quicker lap time.

Speaking of which, another new option is the AMG Track Pace data logger. Built into the COMAND infotainment system it uses GPS and 80 different performance parameters to allow you to analyse your capabilities on a circuit. You can download and study the data, but you can also be fed real-time information, with large red or green time displays flashing up to let you know whether you’re up or down on your previous best sector time. A number of circuits are already preloaded onto the system (Spa and, obviously, the Nürburgring included), plus you can upload your own tracks.

The UK’s biggest automotive event is back for another year. Here's our show guide
Skip to HeaderSkip to Content