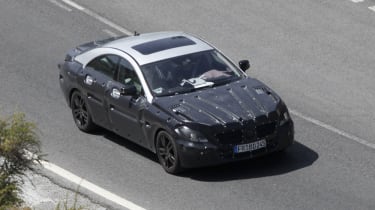 The replacement for the Mercedes CLS has been spied out testing.

It’s set to keep the same name, but has a pretty hard act to follow – the outgoing CLS not only made the four-door coupe class popular, but has developed a real following, standing out alongside its more conventional Mercedes stable mates.

A whole host of rivals have followed in the same vein, with the Porsche Panamera, Aston Martin Rapide, Audi Sportback and even Volkswagen’s Passat CC all boasting similar bodystyles.

The Mercedes is still known as the original, though, and styling is unlikely to be a revolution over the current model, with mostly subtle tweaks to develop its looks rather than mess with a successful formula. Expect the taut and angular new Mercedes E-class to influence much of the changes.

Likewise the engine range, which will probably be lifted from the new E. That’s no bad thing, as its efficient petrols and diesels have attracted plenty of press admiration. The 250 and 350 CGI petrols (201bhp/228lb ft and 288bhp/269lb ft respectively) and 250 and 350 CDI diesels (201bhp/368lb ft and 228bhp/398lb ft) will be the core of the CLS range, with a petrol hybrid version a possibility.

No clues yet as to whether there’ll be a high-powered V8 AMG version, with the official Mercedes tuner ruling out a hot E-class Coupe. We’ve recently driven the new E63 AMG, though, so it could go either way. Fingers crossed we’ll see one, as the last AMG CLS was a bit of a cracker…

From the evidence of these shots, the car isn't too far off complete, so expect to see the new Mercedes-Benz CLS on the motor show scene sometime next year, with UK sales likely from early 2011.