Though it's no M5, the sleek Merc four-door responds well to the AMG upgrade regime 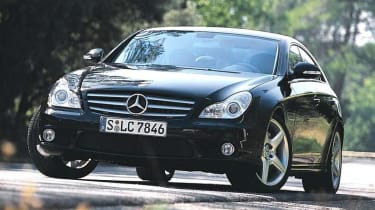 You might think BMW had done a pretty good job of killing off the Mercedes E55 AMG when it launched the deeply wonderful BMW M5 last month. With 507bhp, it eclipses the mere 476bhp of the E55. With seven gears that can be controlled via paddles or left to self-shift when you're feeling lazy, it trumps the E55's tally of five ratios. And as a driving machine the M5 simply blows the E55 AMG away.

But the E55 still has an appeal all its own. It's stupefyingly quick yet utterly smooth and effortless. It doesn't involve like an M5, but then it's not meant to. The M5 probably wouldn't dent the super-Merc's sales at all. But in an interesting piece of product planning, Mercedes has created a far more damaging in-house rival to the E55. And here it is; the slightly less practical, massively more attractive and only slightly more expensive CLS55 AMG.

Whether you prefer the straight-laced E-class or swoopy CLS architecture is subjective, but the consensus seems to be tipped firmly in the CLS camp around these parts. What's more important is the driving experience and even a brief drive in the £68,000 CLS55 suggests that dynamically it's a cut above the £63,450 E55. The greatest improvement is in steering feel and response, which can be attributed to the new 10 per cent quicker steering rack (although this will be adopted on E55 AMG soon). Lowering and stiffening the Airmatic suspension enforces the CLS's superiority and helps create a surprisingly nimble if still slightly remote sports saloon.

Let's not get too carried away, though. The differences from E55 to CLS55 aren't going to send BMW's M division back to the drawing board. The CLS is no great communicator and like nearly all AMG products its central appeal lurks under the bonnet. The 5.5-litre, three-valve-per-cylinder supercharged V8 does sterling service here. Even if you're well acquainted with the blown V8, here in 476bhp/516lb ft tune, it feels unnaturally powerful when you pin the throttle, the auto slips into second, then proceeds to rip through the gears, speedo needle in sync with the frenzied rev counter. The torque is mighty and it gives the CLS55 an effortlessly long-legged gait.

Huge 360mm discs, manfully gripped by eight-piston callipers borrowed from the SL55, are mercifully more than capable of curbing any excesses as corners interrupt the V8's march towards light speed. And when you've got the Airmatic suspension on its stiffest setting the corners are attacked pretty keenly. There's strong front grip and not a great deal of body roll and the optional rear 285/30 ZR19 P Zero Rossos (the standard 18in rubber is 285/35) deal admirably with the V8's freakish grunt. Occasionally the ESP has to intervene, but it's not over-eager and the truth is that without it the CLS would become a 1920kg weapon.

What the CLS lacks is detailed feedback; the steering is quick and accurate but you still feel isolated from those wide front contact patches, and even on its stiffest suspension setting the CLS55 doesn't have the ultra-tight body control of a true sports car. Instead its sports saloon status is assured by its monster acceleration (0-62mph in 4.7sec), grip and braking capabilities rather than any real involvement. It's a little sharper and more rewarding than the E55 and surely kills the more sober saloon's appeal for all but the most conservative of buyers, but it's emphatically not an example of a new breed of hardcore, driver-orientated AMGs. Driven in the company of the impressive SLK55, the CLS felt dull.

Which sounds a little harsh, but with rumours that the CLS would be a much more dynamically adept car than any mainstream Benz, it's a little disappointing to find it's just a slightly sharper version of the status quo.