This is not the Mercedes A-class saloon, rather a larger four-door coupe-saloon with CLS-inspired styling 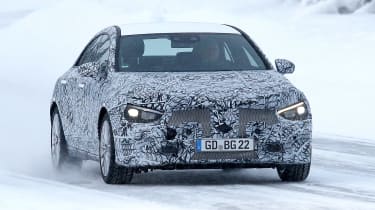 Mercedes-Benz looks to be readying a new compact saloon-coupe for production, undergoing testing with production-ready bodywork and light units. But before you ask, this is not the upcoming A-class saloon, rather the new longer, lower CLA sibling.

Due to Mercedes’ decision to build both a new A-class saloon and a CLA, the latter car will probably be larger than its predecessor, moving the model further upmarket and closer to cars like the A5 Sportback and 4-series Gran Coupe. Without a direct competitor in that segment of the market, Mercedes could see the new CLA as the car to fill a rare gap in its current range.

Like the previous car, the new CLA won’t feature a rear-drive chassis, instead utilising the new A-class platform due to be shown off at the Geneva motor show in March. As a result, the new CLA is likely to include a predominately four-cylinder engine range with either front- or all-wheel drive. 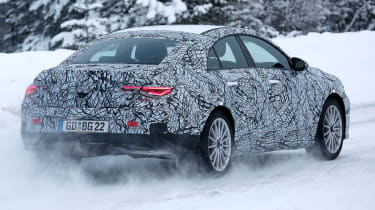 Aesthetically the CLA looks set to ape the new CLS, with what look like similar taillights and a large downturned grille. The headlights do look to be a different shape however, closer to those on the AMG GT 4-door concept car.

Inside expect an all-new interior, sharing elements with the new A-class including the application of Merc’s new MBUX infotainment system. As previously revealed, the new A-class features the next generation Mercedes interior, designed around this clever dual-screen tech and with a new touchpad replacing the current click-wheel controller.

Engine-wise expect the usual combination of four-cylinder petrol and diesel options, including AMG versions. Affalterbach is said to be developing two different options for the upcoming A-class, namely AMG ‘35’ and ‘45’ versions, but at this stage we have no inkling about whether just one or both will be available in the CLA.

The new A-class is set for its full reveal at the Geneva motor show in March, but we don’t expect to see the new CLA till 2019. 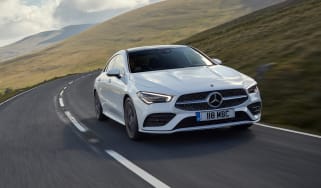