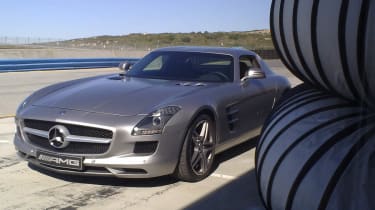 Today (but probably yesterday by the time this flies back across the Atlantic and eight hours-worth of time zones) is the very first day that anyone outside of Mercedes and AMG officially gets to drive the Mercedes-Benz SLS AMG.

It’s a good day. Because of deadlines being the irritatingly inconvenient things they are, the Gullwing won’t appear in the magazine for another six weeks but as it’s a historic occasion I thought I’d scribble a few words in advance and outline a handful of highlights so far as I see them.

The first cause for excitement is obvious but I’m going to say it anyway: the doors. They are right up there (literally) with Lamborghini’s Scissors for being so much cooler than doors have any right to be.

The second reason to jump up and down with glee is the sound the SLS makes. It’s a proper V8 rumble. A deep gargling of 6.2-litres of high-octane mouthwash. It even pops and crackles like a good ‘un on the over run. Should sound very good going round in front of the F1 boys next season (it’s been announced as the new safety car).

Number three on the list of ‘reasons to add one to the Christmas requests’ is the way it handles. You’ll have to read the magazine for the full analysis, but suffice to say it has clear links to the qualities that we’ve enjoyed in the best of the recent AMG Black Series cars.

Number four on the list is the speed that it is capable of: 3.8sec to 60mph and 197mph top speed by no means tell the whole story. Round Laguna Seca (where I’m writing this from at the moment) the SLS is quite capable of going quickly enough to make you feel distinctly uncomfortable as you approach braking zones (let alone a braking zone that develops into the truly barmy Corkscrew).

And that’s it for the moment. You’ll have to wait for another six weeks for the full debrief I’m afraid. It’ll take me that long to calm down and write it.