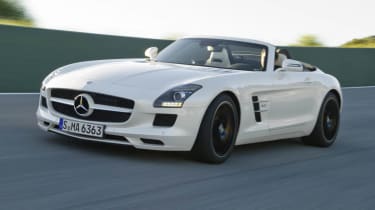 Mercedes has revealed its new convertible supercar flagship, the SLS AMG Roadster. The new drop-top is the spiritual successor to the classic 300SL from the 1950’s and looks fantastic with the hood up or down. The Roadster is mechanically similar to the coupe and retains its 6.2-litre V8 powerplant, seven-speed twin-clutch gearbox and rear-wheel drive. Mercedes engineers have tried to keep the chassis as stiff as possible without increasing weight. Incredibly, the reinforced aluminium space frame itself is only 2kg heavier than the coupe’s while overall weight has risen to 1660kg; 40kg more than the coupe.  The biggest difference between the two is the absence of the coupe’s most distinctive feature, its gullwing doors. The upshot however is the ability of the driver to hear that glorious 6.2 AMG V8 unhindered by a roof. The hood itself is a fabric affair and much use has been made of magnesium and aluminium in an attempt to keep the centre of gravity as low as possible. It is available in red, black or beige and can be lowered in just 11sec, whilst moving at speeds up to 31mph. Inside, the cockpit is similar to the coupe but new features have found their way inside such as Mercedes’ patented ‘Airscarf’ system that directs warm air at the driver’s neck. A new selector for the E-GEAR also makes an appearance and in keeping with the cabin’s aeronautical styling cues, it is reminiscent of a jet fighter’s thrust control. With 0-60mph in a claimed 3.8sec and a top speed in excess of 180 mph, the performance is sure to satisfy the needs of any enthusiast, but the roadster will be more at home whilst trans-continental touring than on a trackday. Therefore the designers have worked hard to make this car as practical as the coupe, with a 173-litre boot just three litres down on a Gullwing-equipped SLS. The roadster will debut at the 2011 Frankfurt motor show in the autumn, with UK sales in November and an estimated price of £180,000. We’re looking forward to comparing it to its rivals, namely the Audi R8 V10 Spyder, Porsche 911 Turbo cabriolet and the Aston Martin DBS Volante. With the Mercedes SLS AMG beating off those marques in our big coupe group test (click here), you’d fancy the soft-top to do the same against its convertible contemporaries. Mercedes SLS v Porsche, Bristol, Aston, Ferrari and R8 We take the Mercedes SLS AMG on a US road trip More Mercedes SLS AMG Roadster news and pictures