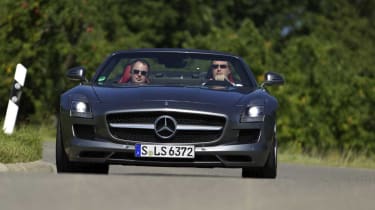 evo has been given an exclusive ride in the new Mercedes SLS Roadster with AMG boss Ola Kaellenius - ahead of its public debut at the Frankfurt motor show.

Mechanically the SLS Roadster is effectively identical to the existing SLS coupe, sharing the same 563bhp 6.2-litre naturally aspirated V8 engine and seven-speed twin-clutch rear transaxle. Performance is near identical, with a claimed 3.8-second 0-62mph time and a top speed - with the roof up - of 197mph.

AMG reckons that the Roadster will make up more than half of SLS global sales when customer deliveries start later this year, and losing the coupe's gullwing doors has required a more substantial re-engineering than that normally given to soft-top variants. The Roadster has different A-pillars to accommodate its conventionally hinged doors, along with thicker sills to help maintain the body's rigidity, additional struts on the front bulkhead and a new cross-member behind the seats to accommodate the deployable roll-over hoops.

Despite the folding roof, boot capacity is almost identical to that of the SLS coupe - 173 litres of space should be up to a weekend's touring. Kaellenius says that losing the gullwing doors and their top hinged mechanism has saved around 20kg, effectively offsetting the extra weight of the body reinforcement. The Roadster's bodyshell is just 2kg heavier than the coupe's, and although the three-layer soft-top and its electrical mechanism adds another 40kg, the numbers are close enough to allow the roadster to effectively match the coupe's performance - Kaellenius says his goal was to 'make a car with a dynamic experience equal to that of the coupe.'

We'll have to wait to get behind the wheel to tell you whether that's been delivered, although from the passenger seat the Roadster feels both impressively rigid and as effortlessly rapid as its tin-top sister. The Roadster also gets three-mode active dampers for the first time, with the ability to choose between 'comfort', 'sport' and 'sport plus' modes. The 'comfort' setting is slightly softer than that provided by the coupe's passive dampers, but both the 'sport' modes are stiffer.

The ride also gave us a chance to get close to AMG's new 'Performance Media' system, an on-board data-logger that uses sensors and the car's GPS system to show performance figures, including 0-60 times, quarter miles and cornering G loads. A neat detail is the ability of the system to 'learn' a track, which can then be divided into sectors, with the driver shown how much better, or worse, they're doing in each sector compared to previous laps. Although designed for use with racetracks, Kaellenius confirms there's nothing to stop a driver from using the system to record a favourite road.

We'll be driving the SLS Roadster next month - check back to evo.co.uk to find out where we think it fits into its hard-fought segment. UK sales will begin in November, with a price around the £180,000 mark.