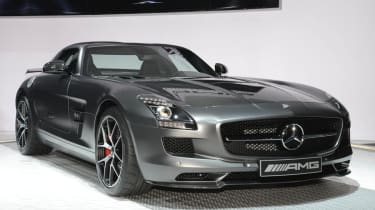 The Mercedes SLS AMG GT Final Edition has been unveiled at the LA and Tokyo motor shows.

As the name suggests, this marks the beginning of the end for SLS production. The model has been on sale less than four years, but makes way in 2014 for a new, smaller sports car (codenamed the C190) which will tackle the Porsche 911 head on. The availability of very low mileage SLS AMGs for over £40,000 less than new suggests demand hasn’t been as high as it is for its supercar rivals.

The Final Editon is a bold looking thing, with a fixed carbonfibre rear wing inspired by the SLS Black Series and a carbon bonnet, Mercedes claiming that the latter increases downforce over the front axle and improves the car’s drag coefficient rating.

New 19in forged alloy wheels come with two variations of matt black colour scheme and the option of bespoke AMG Dunlop Sport Maxx Race Cup tyres, ideal for ‘use by aspiring racing drivers on private or closed-off circuits’, we’re told. More superficial tweaks inside include a ‘1 of 350’ interior plaque and an Alcantara ‘3D seam’.

Mercedes SLS Final Edition sales start in March 2014, with UK prices confirmed closer to that time. Available in Roadster and gullwing Coupe forms, with a total of 350 being produced, expect a rise over the range’s current £165,030 starting point.