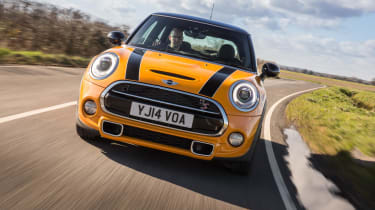 You don’t need to be a driving enthusiast to appreciate the myriad talents of BMW’s revitalized Mini brand, but it has always helped. The latest Mini might be the biggest, most expensive, most technologically-advanced and most frugal yet, but it still retains that sporty feel first sought by BMW when drawing up plans for the classic BMC car’s replacement.

Perhaps most impressive is that you don’t sacrifice the Mini’s fine-driving appeal even if your budget stretches only to the base model, but the biggest thrills can still be found on cars wearing a Cooper badge. The new Mini’s styling might be an acquired taste, but to drive it’s as dynamic and vibrant as ever.

Avoid the temptation to pick larger, more fashionable alloy wheel sizes. The Cooper comes as standard with 15in wheels and the Cooper S with 16in wheels. We've tested both Cooper and Cooper S on 17in options and they imbue the car with an unforgiving ride quality. By contrast, the Mini One we tested – on standard 15in alloys – flows down broken British roads quite nicely.

'The new car’s electric power steering system is quicker to react than the old one’s, and there’s a noticeable increase in front-end grip, but the keen responses stay the same, as does the nicely-poised balance between the grip offered by the front and rear ends.'

Engine and gearbox > The Mini range begins with a a 1.2 litre turbo-charged 3 cylinder with 100bhp and 132lb ft from 1400-4000rpm. This is followed by the Cooper S, which generates 189bhp and 206lb ft of torque. The top end JCW is even more potent. Diesels are also available, if a little dull.

Ride and handling > The Mini has always had sharp, direct steering but the new car takes that to a new level. Quicker to react and with improved front end grip, it’s a very impressive dynamic package.

MPG and running costs > The new Mini consumes less fuel and has less road tax. Most of the cars sit in the £20 VED band so they won't break the bank. Mini also offers five years or 50,000 miles of fixed-price servicing.

Prices, specs and rivals > Opt for the basic Mini One and expect to pay £13,750. The Cooper S commands an £18,655 premium. Rivals like the Peugeot 208 GTI and the Renaultsport Clio 200 are cheaper, while the Fiesta ST is a true bargain.

Interior and tech > The Mini's interior at a glance will be familiar to existing owners, but the large speedometer is now located behind the steering wheel. Instead, the speedo’s previous home now houses the car's satellite navigation system.

Design > The new Mini has grown compared to the outgoing model, and sits on a new platform called UKL1. This translates to a larger interior and greater boot volume.