The Mitsubishi Lancer Evo 6 was a high performance hero of its day, bringing rally car capability to the road 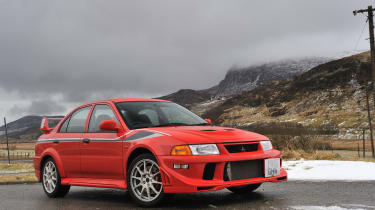 For many, the Mitsubishi Lancer Evolution series peaked with the Evolution VI. That’s partly because it represents the last time the Evo was truly successful in motorsport, with Tommi Mäkinen taking his fourth World Rally Championship title in the car in 1999. Subsequent Evo road cars might have been (and were) spectacular, but the brand fell off the rallying map with the Evo VII, and left the sport shortly after.

But the love for Mitsubishi's Evo 6 is partly, we suspect, down to the way it looks. No Evo that followed looked quite as brutish, quite as dramatic, nor quite as purposeful as the VI. Nor was competition with the Subaru Impreza quite as tantalising as it was in the late 1990s - and to top it all, the Evo VI gave us one of the most desirable special edition models in homologation history, in the form of the Evo VI Tommi Mäkinen. 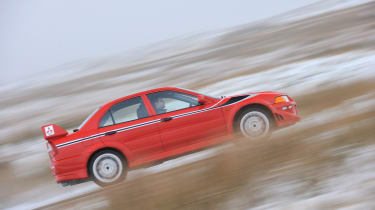 At some stage, evo has driven them all - and when the magazine was in its infancy, Evos were a familiar sight in our pages. Here we look back on what made the Evo VI the car it was.

Appropriately, the Lancer Evolution VI was a gradual evolution from the previous Evo V and before it the Evo IV. All sat on the same, seventh generation of Lancer platform (the first three cars were based on the sixth-generation Lancer) and the engine found in the VI was yet another development of the same 4G63T 2-litre, turbocharged four-cylinder of the very first Evo.

In its latest state of tune the inline-four produced 276bhp at 6500rpm - conveniently, a figure bang-on the Japanese gentlemen's’ agreement figure for power outputs at the time and to be taken with a pinch of salt as a result. Maximum torque of 274lb ft was developed at 3000rpm, and power was sent through a five-speed manual (remember those?) to all four wheels through an Active Yaw Control active differential - effectively torque-vectoring.

Perhaps the best-known Evo VI is the aforementioned Tommi Mäkinen Edition. Mechanically similar, it developed the same power and torque outputs, but a titanium turbine helped spool speeds and dropped the torque peak by 250rpm. It sat a little closer to the tarmac too and featured extra body bracing, but it’s most easily recognised in full red paintwork with WRC-aping stripes. The front bumper was revised too (it lost the standard car’s spotlights, but gained vents) and sports Tommi Mäkinen badging on the bootlid and stitched into the Recaro seats. 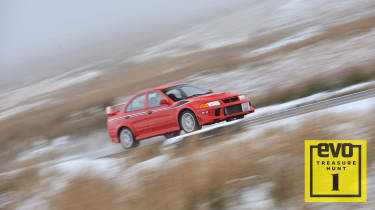 ‘As well as the visual changes, the Evo VI gets a new ECU, a bigger intercooler, oil-cooler and radiator. Its delivery feels even punchier, more old-school turbo; treading on its throttle from low revs is like lighting a firework and waiting for the fuse to hit the powder. Nothing much happens until the revs rise beyond 3000rpm and then there’s an explosion of power. This glorious burn is sustained right up to the 7000rpm red line, and the engine takes on a beefier, more purposeful bark along the way. 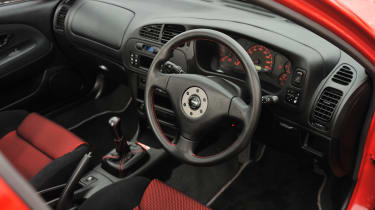 ‘The Evo VI’s steering has very firm self-centering which keeps it tracking straight, and a sophisticated ‘yaw control’ system which gauges the attitude of the car when you’ve turned into a corner. It then steers the rear wheels fractionally and juggles the torque in the four-wheel drive system to stabilise it. Once you’ve felt it in action a few times you’re a convert, though when you’re really leaning on the grip the sensation is slightly surreal.’

‘There’s enough slack in the steering rack off-centre that you can wobble the wheel by a few degrees without provoking any kind of response from the front wheels, but that’s just about the only criticism that can be levelled at it. It’s wonderfully detailed and intuitive, giving a clear impression of what’s going on at road level.

‘With that hint of compliance in the steering and body movements that seem quite exaggerated by today’s standards, the TME can feel a little lazy at first, but in fact the car is super-alert and ultra-agile. It feels so light on its wheels, too, with suspension that soaks up bumps so beautifully that the car almost seems to float above the road.

‘The industry talks so enthusiastically about the advances made in turbocharging over the last few years, but there aren’t many forced-induction in-line engines on sale today that are more exciting than this one.’