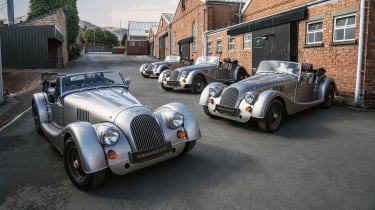 Morgan has created a limited-edition version of its long-standing Plus 4 model – one that will celebrate both 70 years of Plus 4 production and the end of Morgan’s steel chassis. Limited to just 20 units, the Plus 4 70th Anniversary Edition features a selection of bespoke aesthetic enhancements as well as a subtle tuning of its four-cylinder engine and exhaust system.

Just a few weeks after the announcement of the all-new, aluminium-based Plus Four, the British marque revealed that the very first example has rolled out of its Malvern factory gates (ahead of its COVID-19-enforced closure), and that all 20 units already have buyers.

Steve Morris, Morgan Chairman and CEO, said: 'It has been fantastic to witness the first Plus 4 70th Anniversary model complete production. They represent the last steel chassis models, and we are delighted to be able to celebrate such a significant milestone in this way.’

The powertrain, as one might assume from the Plus 4 name, is a 1999cc atmospheric four-cylinder engine mated to a five-speed manual transmission. For the 70th Anniversary Edition power has been lifted to 180bhp, up from 154bhp thanks to a new engine map by Morgan’s in-house motorsport development team and a sports exhaust. Acceleration is rated at ‘under seven seconds’. 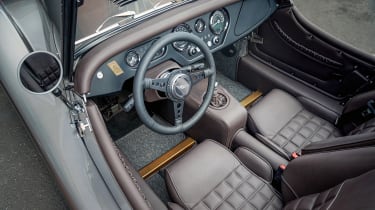 All units will be finished in a bespoke titanium metallic paint, contrasted to a set of dark silver wire wheels and front valance borrowed from the new Plus Six. Morgan has even gone to the effort of highlighting the chassis underneath by painting it gold, which will be nice for the mechanics likely to be the only ones to see it.

Morgan has applied more upgrades in the cabin with higher quality leather hides on the seats, a ravenwood veneer applied to the traditional dashboard and a Moto-Lita steering wheel.

That’s not to say the Plus 4 model run will end all together though, as Morgan moves across to the all-new aluminium chassis that was first introduced underneath the Plus Six that starred in our Car of the Year 2019. As a result, we expect to see a new Plus 4 later in 2020, continuing the 70-year nameplate.