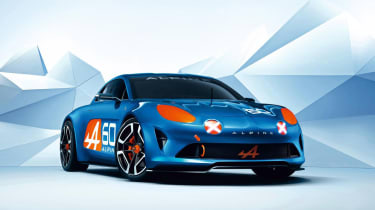 The return of the iconic Alpine brand has been a long time coming, but takes another step forward this weekend with the debut of a new concept car at the Le Mans 24 Hours.

Created to celebrate six decades of the firm’s heritage, the Celebration concept takes the form of a compact two-seater coupe.

The car made its track debut in front of tens of thousands of motor racing fans at the Le Mans 24 Hours, circulating on track behind one of Alpine’s most iconic models – the rally-winning A110.

That car, produced from 1970 to 1973, remains one of the most desirable vehicles in the French brand's history. Powered by a 1565cc inline-four mounted behind the rear axle, its light weight (just 620kg) and strong traction made it a formidable car on the rally stages. Despite a modest power output of 123bhp, it could sprint to 60mph in under 8 seconds and continue up to 130mph.

It’s this car that the Celebration takes the greatest visual inspiration from, particularly at the front where a quartet of headlights and low-profile, creased bonnet are a true modern interpretation of the original car.

Classic influence is also apparent in the coupe’s side profile, with a subtle curve from headlights to tail lights, and the wraparound rear window. Distinctive alloy wheels replicate the complex shapes of the A110’s rims, while a deep metallic blue colour scheme also echoes past models. 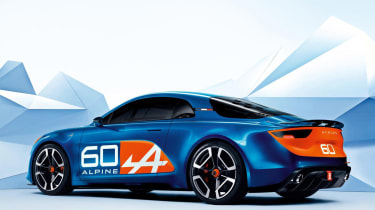 Other details are picked out in bright orange, giving the car links to both Alpine’s on-track Le Mans competitors and the recent A110-50 concept, that first heralded the return of the brand.

What’s apparent in the metal is that the latest concept is a great deal smaller than the A110-50 – if not quite as petite as the original A110. Alpine’s comment that the Celebration sheds gimmickry for simplicity is also true – the concept is remarkably free of superfluous detail, beyond the celebratory 60th anniversary paint scheme.

The details that do stand out are largely functional – subtle scoops above the rear wheel arches guide airflow for cooling, and a rear diffuser helps channel air from beneath the car. Louvres in the engine cover reference the concept’s mid-engined layout – previous Alpine road cars have of course been rear-engined.

While there’s little clue as to what powers the concept, and indeed no indication that it will reach production in exactly this form, the Celebration concept is the strongest sign yet that the brand is soon to return.

Whether it will match the race and rally success of the A110 – with six WRC victories to its name in the 1973 season – is yet to be seen. Those missing the car in action at Le Mans can catch it once more at the upcoming Goodwood Festival of Speed.