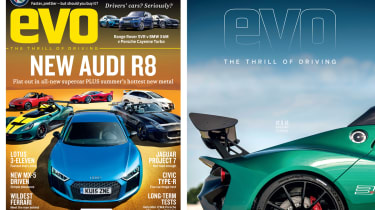 There’s something for everyone in this month’s issue, with just about every level of performance car squared away, from hot hatches to full on supercars.

It's been an adventure filled month, with an incredible road trip to Le Mans as well as a drive in the new Audi R8 around the Circuit de la Sarthe.

Want to know more? Read on for a full rundown of evo 212’s contents.

Can the lightest MX-5 since the 1989 original deliver on its potential? Small proportions, attitude and promise of a back-to-basics demeanour certainly attracted our attention, but does such an old school take on a drivers’ car still work in 2015? Dan Prosser delivers his verdict. 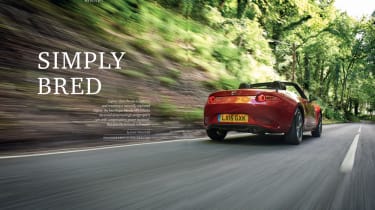 Join Richard Meaden as he drives Mazda’s screaming Group C legend up the Goodwood Hill Climb. A car that, thanks to the sound of the 787B's ultra-loud quad-rotor engine, kept him awake during the night of the 1991 Le Mans race.

With the new car finally among us, we revisit the three previous incarnations of Mazda’s best selling sports car. Does the Mk4 offer more or is older better? evo’s resident MX-5 expert, Antony Ingram, drives the Mk1, Mk2 and Mk3 back-to-back at Goodwood to explore each car’s best (and worst) traits.

Dan Prosser has never driven the Circuit de la Sarthe, yet here he is sat in a brand new Audi R8 (also new to him) in the iconic track’s pit lane. We join evo’s road test editor as he attempts to drive the new R8 all the while trying to not, as he puts it, ‘stuff a new supercar into a tyre wall’. 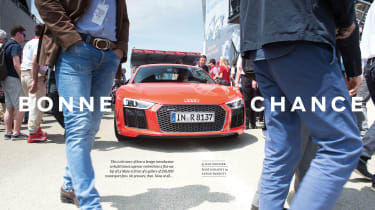 We got our first taste of the new Honda Civic Type R in evo 211, but now it’s time to pit it against its fiercest rivals. We gather the VW Golf R, SEAT Leon Cupra 280 Sub8, BMW M135i and Renaultsport Megane Trophy 275 together to face Honda’s new challenger on some of Wales’ most twisty tarmac. How does it fare?

Henry Catchpole talks exclusively to the man responsible for deciding who gets a Ferrari XX car, Enrico Galliera. Standing beside the marque’s most extreme creation, the track-only FXX K, the 50-year old Italian explains why road car sales are unaffected by Ferrari’s recent F1 woes and expands on why a c£1.8million price-tag hasn’t deterred buyers from the FXX K programme.

Jaguar Land Rover’s Special Vehicle Operations (SVR) has turned the F-type V8 R into a sharper, more focused beast. It gains a D-type-esque rear rollover hump, 25bhp more (up to 567bhp) and sheds 45kg. But it costs £135,000 and just 25 will be produced. Is the Project 7 just a ramped up F-type or a serious track-focused drivers’ car? Jethro Bovingdon offers a verdict. 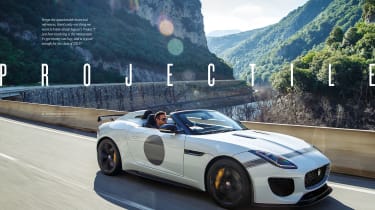 Stuart Gallagher drives two key alternatives to the limited-run SVR from Ferrari and Aston Martin. The former’s California T features the carmaker’s first turbocharged engine since the F40, and the latter's V12 Vantage S Roadster is based on a platform that’s, to put it bluntly, getting on a bit. But as far as open top, front-engined, rear-wheel drive sports cars go, these two are among the very best. Which wins today?

We embark on a pilgrimage to Le Mans in two road going siblings of the 24 hour race’s GTE cars. Dan Prosser is in a Porsche 911 GT3, Hunter Skipworth is in a Ferrari 458 Speciale. A dream road trip, read all about their adventures in issue 212.