As Australian car manufacturing is brought to a close, we take a look at the best quick Aussie cars ever built 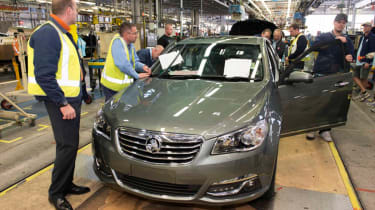 General Motor’s Australian arm Holden has finally switched off the lights at its Adelaide factory, marking the end of Australian car manufacturing. The last of three manufacturers that have shut up shop in the last two years, Holden, like Ford and Toyota before it, has promised to keep local design and engineering operations going, working on a variety of Asia Pacific projects.

Despite the melancholia surrounding the closures and the death of local car manufacturing, the Australian auto industry has been propped up by massive government subsidies for years, after being hit by high local labour costs and cheaper foreign rivals. Australia’s traditional domestic market of the rear-drive family saloon has also been in decline (as in other markets) with the rapidly proliferating SUV now being the preferred choice for many Australian families.

> Click here for our review of the Vauxhall VXR8 GTS

More than just building cars for the people, local car manufacturing went some way to help shape contemporary Australian culture, building icons such as the Commodore and Facon ute that became an integral part of Australia’s national identity. Ford and Holden, both regional outposts of their relevant American parent companies, designed, engineered and built models specifically for the tastes of Aussie motorists, who have always had a propensity for performance orientated machines. 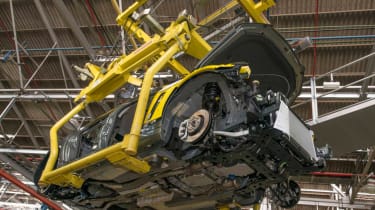 The result has been a long history of hairy-chested performance cars. Cars like the 1971 Ford Falcon GT HO Phase 3, at the time the world's fastest saloon, right up to the last HSV GTS-R W1, a 637bhp monster that makes the Mercedes-AMG E 63 S look like a humble commuter car.

Although it was never sold in any great number in the UK, the end of Aussie manufacturing has meant the demise of the Vauxhall VXR8. The big, fun-loving V8 was noted more for its boisterous demeanour and heart-stopping fuel economy than practical qualities and that's the Aussie car cliché in a nutshell.

> Click here for our drive drives of the Vauxhall Monaro

Although we are regretful of the closures, they are a stark reminder of the frail status quo in the car industry at the moment, putting cash-flow projects like the Porsche Cayenne into context as guarantors for the survival of the brands we love.

Below is a celebration of five iconic Australian cars that helped shape this now terminated industry, in all their untamed, unashamed and unrefined brilliance... 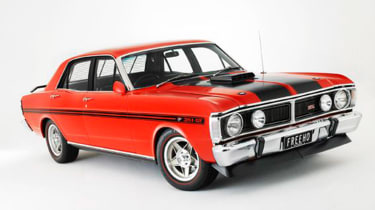 The notion of sticking a massive V8 engine into a sensible family car seems a little archaic these days, but in Australia it was the heart and soul of a species for over 50 years. The 1971 Ford Falcon GT HO Phase 3 was the third in a line of the Australian-designed Falcon models to be fitted with a V8.

Unlike previous GTs, the Phase 3 was specifically designed as a homologation special to allow Ford to run a more powerful entry in the Australian Touring car championship. Although officially rated at 300bhp to satisfy local insurers, the 5.8-litre V8 engine is believed to have produced more in the region of 350-380bhp when the rev-limiter was lifted in customer cars, explaining why it held the title as the world’s fastest saloon in 1971. These are noted as Australia’s most valuable cars, often exchanging hands for over £600k. 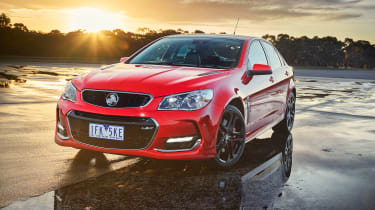 Does the SS-V Redline get any brownie points for being the final V8 Holden? Maybe, but the SS-V Redline is also the best V8 Holden ever, offering the most complete, contemporary package without the loss of that V8 engine. At 6.2-litres, the LS4 V8 is an old generation small-block pushrod engine by GM standards, but it still offered cylinder deactivation and a heady 407bhp power output.

The whole car is dominated by the engine, having more than a whiff of old-school AMG in its character. The talents of local engineers were also on show with the Redline, as the suspension and steering calibrations are perfectly suited to Australia’s lumpen heat-scarred tarmac. Even better, the SS-V Redline could also be had in estate and ute forms, and for around half the price of the similarly sized but far less powerful BMW 530i. 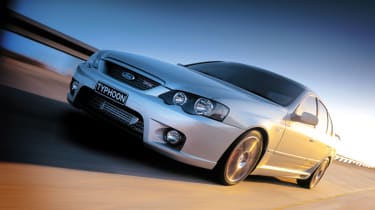 Ford faced an issue back in 2002 when it came to the development of a new hot Falcon, as the only V8 engine it could get its hands on was an ancient 5-litre V8, which struggled to produce much more than 350bhp. Thinking creatively, Ford then turned to its trusty 4-litre straight-six engine, which despite origins in the 1960s, proved to be an interesting base for a performance car.

Ford fitted a turbocharger to that unit for the XR6 Turbo, but FPV took it one step further, liberating some 362bhp and 416lb ft of torque at a hilariously low rpm. The results were fascinating, with more torque than equivalent V8s in a lighter package. The Falcon’s dynamic attributes were also well recieved, lacking the precision of a BMW perhaps, but being notably sharper than the contemporary Holden rival. 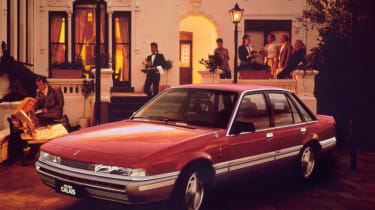 While the youth of Britain were proudly modifying their Citroen Saxos and Ford Fiestas, Australia’s young people had their eyes on a slightly different target. Like the F6 above, the Holden Commodore VL Turbo eschewed the traditional V8 engine for a turbocharged 3-litre straight-six, this time though, it was sourced from a Nissan Skyline.

As with its Nissan counterpart, the VL Turbo responded extremely well to modification, forming the beginning of a tuning culture that could only be considered Australian. Subsequent Commodore models returned to GM-sourced V6 and V8 engines, but few would gain such reputation as the VL Turbo still holds. 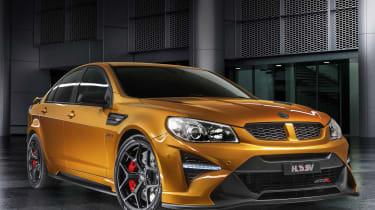 This may look like the VXR8 GTS-R that Vauxhall will be bringing to the UK in limited numbers, but rather than utilising an LSA supercharged V8, the W1 is the only four-door saloon in GM’s entire global inventory that features the rabid, hand-built, supercharged LS9 V8. With a slightly crazy 637bhp, the W1’s engine is the very same that powered the previous generation Corvette ZR1.

In order to fit it in, HSV’s engineers had to completely redesign the wide, but relatively short engine bay to allow for the dry sump oil system. Engineers also designed an entirely new intake system at huge effort and expense. It isn’t just the engine that has been upgraded though, as the W1 is also the only four-door saloon car in the world fitted with Pirelli P Zero Trofeo R tyres as standard, and yes they are the very ones that are optional on a McLaren P1. Suddenly the VXR8 GTS-R looks a little meek doesn’t it?