French sports car? German fast wagon? There's something for almost everyone at this month's Historics auction 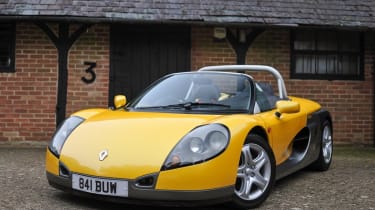 It could also be something to do with recent drives in the fantastic Alpine A110 which have had us looking at some of Renault’s past sports car greats - and while the Sport Spider had the misfortune to be launched around the same time as the dominant Lotus Elise, the Renault Sport-developed, Alpine-built roadster is still one of the most striking and desirable cars Renault has ever produced.

Power came from a 2-litre F7R four-cylinder engine as found in the contemporary Megane Coupe 16v - and a development of the engine that had previously done sterling work for the Renault Clio Williams. At 930kg the Spider was a bit porky alongside an Elise, but the 148bhp engine was still good for 0-60mph in 6.5sec and a 131mph top speed. 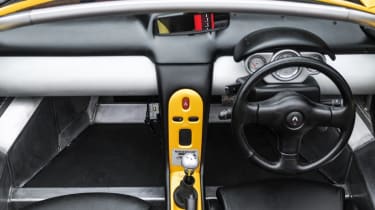 It’s perhaps best known for launching the careers of drivers like Jason Plato and Andy Priaulx, but the 1997 example being auctioned at Brooklands is a lifelong road car and features the windscreen that early cars and the racers didn’t benefit from. There’s a strong service history and just under 14,000 miles on the odometer - all for an estimate of £18,000-£24,000 (and you can find our most recent Spider drive in issue 231 of evo magazine).

For something altogether (Nogaro) bluer, the 1995 Audi RS2 with a £24k-£32k estimate is also worth a look. A kind of greatest hits of Audi and Porsche rolled up into a handsome estate body, it’s one of only 180 right-hand drive cars built (and one of 79 currently registered in the UK). It ‘oozes exclusivity’, as we put it in evo 214. 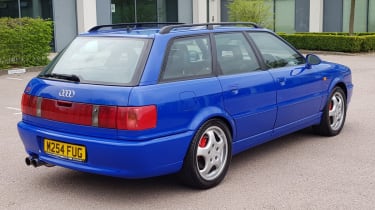 It oozes performance, too - the RS2 used a 2.2-litre turbocharged inline-five good for 315bhp, making it one of few cars from the 1990s that doesn’t seem under-nourished in comparison with the average hot hatchback. There’s a full and comprehensive service history, an MOT until April 2019 - and it’s nicely run-in at 154,000 miles.

Next up is another performance icon, the Ford Sierra RS Cosworth. We’ve recently seen RS500 examples go for big money so this regular Cossie’s £28k-£36k estimate almost seems reasonable, though like the RS2 it’s a high-miler at over 160,000 miles.

It’s a one-owner car though (bought new in 1987) and has an annual service history with Byfleet Ford. We’ll overlook the mileage then and salute that first owner for putting an average of more than 5000 miles a year on the car rather than hiding it in a barn somewhere. 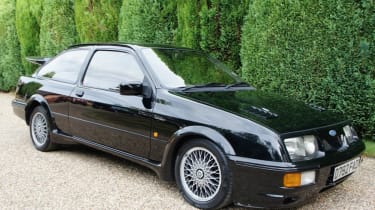 From Team GB comes a stunning 2004 Aston Martin DB9 Coupe. It makes the latest DB11 look rather fussy, and rather expensive too when there’s a £27k-£32k estimate on this Chiltern Green example, and it’s not yet reached the 33k-mile mark.

More brash but no less appealing is a 1994 Bentley Continental R - one of the original press cars no less (previously registered 1800 TU), though it seems to have worn its 99k miles well and boasts a recent head gasket change. There’s also a 1984 Lotus Esprit Series 3 that reflects its decade with white paintwork, gold wheels and a red interior - and no reserve. 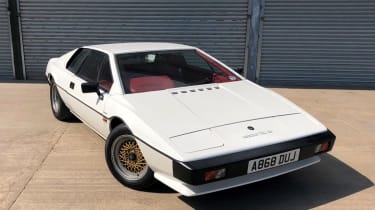 And last, but by no means least, we’ve picked a couple of rarities. One is a 1984 Tickford Capri, again in white, and bearing the chassis number 56 from the 86 originally completed. There’s a comprehensive history folder to support its 41,000 miles and the 2.8-litre V6 is said to be in good health - the estimate is £28k-£34k.

Our other left-field choice couldn’t be anything other than a glorious 1971 Citroen SM. This particular car is left-hand drive and was originally delivered in France, and a recent drivetrain overhaul should mitigate the SM’s reputation for terrifyingly complex failures. £29,000-£33,000 should secure it.

You can find a full list of the auction lots at the Historics website. The event takes place on Saturday, July 7th, at the Brooklands Motor Museum.