The tyre manufacturer has released a new flagship three-tier range, catering to the growing demand for high performance rubber 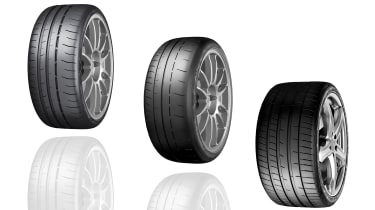 The brand says new technology allows for significant improvements to braking distances and lap times whilst also retaining important elements of the driving experience, such as feedback during turn-in and under braking. Stiff tread ribs ensure responsive directional changes, a closed outside pattern provides control during load transfers and a stiff sidewall further improves handling without compromising ride comfort.

Goodyear says that the standard SuperSport tyre is intended for use on hot hatches such as the Volkswagen Golf GTI, high-performance saloons including the BMW M3 and Mercedes-AMG C63  and ‘everyday’ supercars such as the Porsche 911 Turbo.

Through the use of a high-friction compound, the SuperSport R aims to provide drivers with increased grip over the standard model, providing exceptional dry grip levels. Bridges in the tread pattern reduce deformation of tread blocks during extreme cornering which provides increased cornering stability too. Through the optimisation of the tyre’s footprint for more even pressure distribution, steering precision and feedback have also been further enhanced. The brand says this is intended for use on models such as the more focused Volkswagen Golf Clubsport, BMW M4 CS and Porsche 911 GT3. 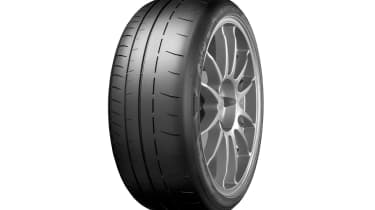 The final tyre in the lineup is the Eagle F1 SuperSport RS, the brand’s most track-focused tyre to go up against Pirelli’s P Zero Corsa and Michelin’s Pilot Sport Cup 2. As you can probably see from the images, it doesn’t feature much tread at all and is designed to allow drivers to make the absolute most of their car on track, whilst also remaining road legal. A ‘highly specialized’ compound with racing origins is used, providing ultimate grip and performance levels in dry conditions. We’d say it’s probably wise to avoid these if you often drive in the wet...

The new range will be introduced next year, with possible fitments ranging from 18” to 21” diameters, 205-305mm widths for the standard and R variants of the tyre and 265 to 325 widths available for the highest performing RS model. Fitments for the Volkswagen Golf GTI and Porsche 911 GT2 RS may be available next year.