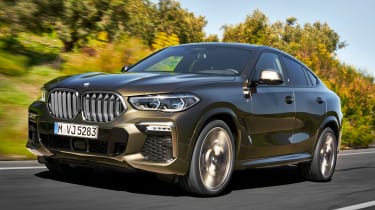 Larger and more dramatic than ever, BMW’s new X6 will turn heads and stomachs in equal measure when it debuts at the 2019 Frankfurt motor show this September, ahead of a market launch in November.

Big and brash sells in what BMW calls the Sports Activity Coupe market, which since the arrival of the original X6 has grown to include cars like the Mercedes-Benz GLE Coupe, Porsche Cayenne Coupe, and more exotic models like the Lamborghini Urus.

And depressing statistic though it might be, these things really do sell: BMW has made more than 443,000 X6 across its two generations and a decade of existence, and like its predecessor, the latest car will be built at BMW’s Spartanburg plant in the US, which also churns out innumerable examples of X3, X4, X5 and the new X7. 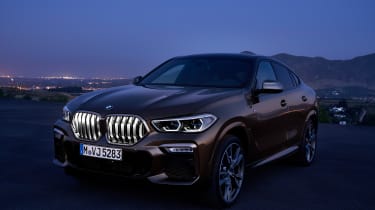 It should be instantly recognisable as an X6 when it finally hits the road, and not just because of the now-standard oversized BMW kidney grille. The rest of the car has grown too, by 26mm in length (to 4935mm) and 15mm in width (at 2004mm), though it stands a little less tall than before, shedding 6mm for a height of 1696mm.

The wheelbase and track have each grown too, which should pay dividends for both handling and interior volume, while BMW says the centre of gravity is lower than before. More apparent is the new styling. That BMW grille is - brace yourselves - now illuminated, not just when unlocking and locking the car, but via a driver-operable switch.

The rest of the car is a hotchpotch of lines, curves and vents all assembled into something resembling the previous model but lacking much cohesion, while both the headlights and tail lights echo those of other current BMWs. Laser lights are an option up front, while some of the design cues change depending on whether xLine or M Sport trim is specified. The latter comes with an M Sport exhaust system and places an emphasis on body-colour trim, while “pearl-effect chrome” details punctuate the former.

Step inside and here too it’s much like other recent BMWs. Once again, certain elements change depending on the selection of xLine or M Sport trim. Inside and out, specification can be enhanced further with parts from the BMW Individual program, while certain parts can be specified with glass detailing, like we’ve seen recently with the gear selector in the 8-series. A Bowers & Wilkins audio system and panoramic glass roof are optionally available. 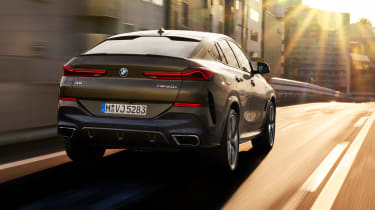 BMW will offer four engines from launch. The diesels - still popular in this class - include a 3-litre inline six badged xDrive30d, and a more powerful inline six as the M50d. Petrol options include the 3-litre straight-six xDrive40i and the 4.4-litre V8 M50i. The latter puts 523bhp (as an aside, that’s considerably more than the old V10-engined E60 M5) and 553lb ft to the road for a 4.3-second 0-62mph time, while the xDrive30d is most efficient, delivering up to 46.3mpg (with 159g/km of CO2) if you’re gentle.

Underfoot you get double-wishbone suspension up front and a five-link axle astern, suspended on electronically-controlled dampers whose behaviour can be adjusted depending on driving mode. Optional Adaptive M suspension Professional throws in active anti-roll technology and rear-wheel steering, which is sure to allow the X6 to do things no vehicle on the wrong side of two tonnes should be capable of. 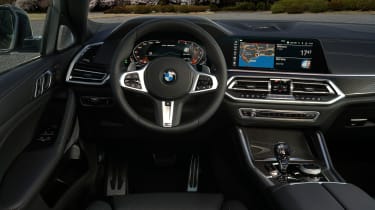 Self-levelling air suspension is also available - allowing the driver to boost height by 40mm in the unlikely event of off-road driving, or lowering it by 40mm to aid access for people and luggage - and it’s even adjustable via BMW’s Display Key. An xOffroad pack adds a rear locking differential to the air suspension, with snow, sand, gravel and rocks modes to assist with loose-surface driving. The optional 22-inch wheels are probably best avoided if you plan to do much off-roading, however.

Naturally, a suite of safety features is included, along with functions to aid parking and reversing. BMW’s “Intelligent Personal Assistant” brings with it Siri or Alexa-style control over your day-to-day, and can “even provide casual conversation”. The 12.3-inch instrument display also uses BMW’s latest tech, though the days of clear, understated BMW instruments seem to have come to an end.

Pricing and full specification details should be announced closer to the X6’s Frankfurt show debut.