Not the Milano: the Alfa Romeo Giulietta hot hatch to replace the ancient 147 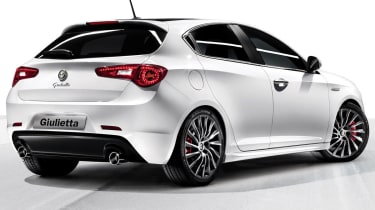 Alfa Romeo has pulled the wraps off its new hot hatch. The Giulietta replaces the ageing 147, which has been out nearly a decade, scooping the European Car of the Year award for 2001. There had been some mystery about its successor, which was set to be called the Milano but had its press release pulled a week ago as Alfa scurried away and changed the name to Giulietta. Read why here. It was probably worth the wait, though. While it’ll be made in five-door form only, that’s no bad thing, as the styling is pretty smart. Alfa’s now regular tucked-away rear door handles feature to give a more coupe-like appearance, while the rear end is particularly pretty. There are inklings of the Mito supermini up front – a good or bad thing, depending on whether you love or hate Alfa’s Mini rival – and the grille is particularly dominant. A set of seemingly de rigueur daytime-running LEDs are also present. Four engines will be available from launch, all of them turbocharged. There are two petrols, a 118bhp 1.4-litre TB and 168bhp 1.4 Multiair TB, and two JTDM diesels, a 104bhp 1.6 and 168bhp 2-litre. They go on sale in the UK next summer, while a range-topping 232bhp 1750 TBi Cloverleaf will join the range in the autumn. All will be front-wheel drive, with an all-new chassis platform to make it (hopefully) a belter to drive. The DNA adjustable dynamics system from the Mito is present, as is Alfa’s trick Q2 electronic differential. The Giulietta is longer than its key rivals – the VW Golf and Audi A3 Sportback – and boasts a longer wheelbase. Despite this, it’s set to undercut them on price, kicking off at around £14,000. It’ll gets its world premiere at the 2010 Geneva motor show next March, and go on to feature at the UK’s Goodwood Festival of Speed, where Alfa Romeo is a featured mark in 2010. Follow evo on Twitter for the performance car latest