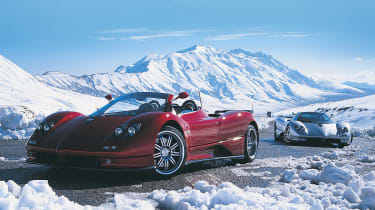 What’s the best car of the last ten years? It’s a particularly apt question as the first decade of the 21st century draws to a close. So we’re asking it, or more specifically, asking YOU it. Every weekday we’re looking at an evo Car of the Year contest from the Noughties, detailing the top five and throwing the vote at our lovely readers to pick the winner. The ultimate ten will then fight it out in the New Year for evo Car of the Decade. Click for winners so far and eCotd roundup Today’s the turn of 2001. Peruse the performance cars below and get voting this way. The link takes you to the community, where if you scroll down to the bottom you’ll find the voting panel. Head to the Forum if you want to do more than click… Pagani Zonda C12 S (click the car names for content)Can a quarter of a million pound supercar really be Car of the Decade? Yep, course it can. While Zondas admittedly feature in evo well, quite a lot, it’s not without good reason – few cars are able to offer up such a full-strength supercar experience twinned with such utter accessibility. An Elise with a V12 might be stretching the point, but you get the picture. David Vivian – ‘The Zonda is all your supercar fantasies rolled up into one. Clearly inspired by the McLaren F1, it hits the jackpot by delivering similar engineering and thrills for less than half the price.’ BMW M3 (E46)Is there a better, more feel-good all-round performance car in this list? The M3 certainly offers much – four seats, a sonorous 338bhp straight six, typically top-notch rear-drive chassis – while taking not a lot: £38,500 in 2001, nine grand upwards nowadays. John Barker put it concisely – ‘it scores consistently highly across the full spectrum of evoness’. ‘It’s almost second nature to exit junctions and slower corners with a smidge of opposite lock’, said Peter Tomalin, ‘even if your name isn’t Barker or Meaden.’ Amen to that. Lamborghini MurcielagoAnother year, another Lambo. This is one of seven Bull-badged candidates for evo Car of the Decade, and it was the first complete product post-Audi takeover. So does that mean it’s all watered down and sensible compared to the Diablo it replaced? Nah. It does boast a trip computer, but rather than shout your fuel economy and range at you it records your overall top speed, top speed on current journey and maximum g pulled. Still a Lambo, then. If it wasn’t for the Zonda it would have impressed even more on eCoty ’01. And the trip computer’s figures during the test? 180mph, 162mph and 1.06g respectively. Excellent. TVR TamoraBit of an unexpected one, this. Trawling through the evo archives it’s a bit of a surprise to see one of Trevor’s more forgotten sports cars turn up so highly, especially in an eCoty dripping with talent – Elise, Vanquish, Evo VII and Clio 172 were all swept aside by the Tamora. ‘It’s close to roadster perfection,’ enthused Harry Metcalfe at the time, while Dickie Meaden put it at the top of his eCoty ’01 voting list. A car that we’re wrong to forget beside the Griffith and Cerbera glory cars, then. Is now the time for justice? A TVR would certainly be a fun Car of the Decade…  Porsche 996 CarreraOf course there’s a 911 here. Just one of our Car of the Decade rundowns will be lacking a rear-engined Porsche, but that’s probably not groundbreaking news. This is the only eCoty year you’ll find it scraping it through at the bottom of the top five, though. How come? Dickie – ‘A better car all round than the M3 – but not necessarily more exciting, almost laid back. It just lacks the previous model’s final five per cent of involvement.’ Of course it still beat Lotus, Aston, the new Merc SL and even a Ruf Turbo into fifth place. So it ain’t that bad. So, they’re your contenders for 2001. Click here to vote for your favourite and use the eCotd Forum thread to air your opinions or tell us about cars that should be here. And don’t forget to come back tomorrow for the best of 2002… Follow evo on Twitter or join our Facebook page