Nissan keeps promising compact sports cars through its concepts, and failing to deliver. The Urge was one of the most memorable. 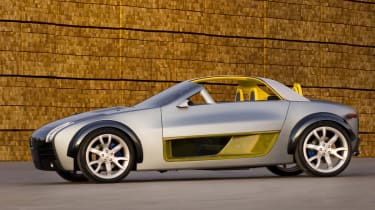 It’s difficult to think of a company that has produced more compact sports car concepts – without actually building a single one of them – than Nissan.

In the past fifteen years or so we’ve seen the retro-style Jikoo of 2003, 2005’s front-engine, rear-drive Foria, the electric powered Esflow revealed in 2011, 2013’s IDx Freeflow and Nismo concepts, and the 2013 Bladeglider – which has recently made a reappearance.

It was the Urge concept of 2006 that raised most interest however, as it’s the closest Nissan has got to fielding some kind of rival for the Mazda MX-5 – at the time, Mazda had just launched the third-generation of its roadster.

There were gimmicks, of course. The car was aimed primarily at young drivers based on the results of a dubious survey that concluded the demographic was most interested in ‘technology and gaming’ in their first cars.

As a result, the Urge included a hard-wired Xbox 360 and the then-current racing game PGR 3. If anything dates a car more than a contemporary satnav it’s a contemporary racing game, but the Urge featured the unusual option of being able to control the game through the car’s own steering wheel, throttle and brake pedals. 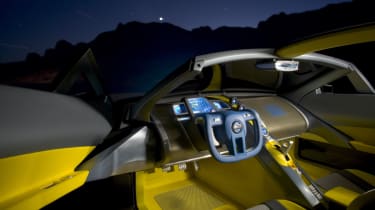 Much more interesting from an evo perspective was the Urge’s hardware. It was relatively lightweight at 1089kg, and its front-mounted, high-revving, small-displacement engine sent power to the rear wheels through a motorcycle-style six-speed sequential manual gearbox.

Brakes were by Brembo, wheels were a significant 19- and 20-inches in diameter front and rear, and the structure was a compact aluminium spaceframe, around 41cm shorter than a 350Z at the time. Despite this, it had space (in theory) for three, with two up front and a single seat behind.

The overall concept was to incorporate elements of motorcycle design into a car, and the stripped-back bodywork and cockpit, with liberal use of billet aluminium, mesh-finished seats, and rubber flooring, enhanced the effect. The shape didn’t quite have the coherence of similar sports car concepts but with a projected $20,000 price tag it certainly held appeal.

And of course, that was the last we heard of the Urge, just as the Jikoo, Foria, Esflow and IDx have all slid away from production reality. Only the Bladeglider – a car unlikely to hit that affordable price point promised by the Urge – seems in any way likely, and it breaks well free from the classic sports car layout (and potential for inexpense) we wish was more common.

Anyway, we’re placing our bets on what the next Nissan concept car will be. Compact, front-engined, rear-drive sports car, anyone?