Nissan GT-R review - The GT-R has never been more usable, yet it's still blisteringly fast - Nissan GT-R performance and 0-60 time

With each model year upgrade the GT-R has been made faster and more powerful. The current version has 562bhp, 20bhp up on the older model. Despite the extra power Nissan claims the same 2.7sec 0-62mph time and 196mph top speed as before.

An advanced four-wheel drive system, a quick-shifting twin clutch gearbox and an electronic launch control system ensure the GT-R accelerates at a staggering pace, no matter what the official figures might be. The GT-R is, as it was when it was new, a phenomenally quick car. 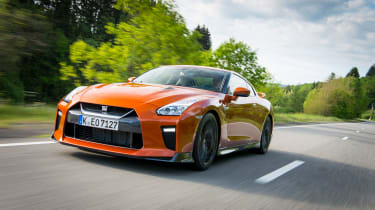 Nothing else at this price point – excluding a handful of ultra-lightweight trackday cars – offers such impressive performance. You’d need to fork out close to £130,000 on a Porsche 911 Turbo to match the GT-R’s straight line pace, for instance.

Nissan has certainly succeeded in its aim of reducing NVH. On the Autobahn the GT-R still rips up to 150mph with utter disdain, feeling beautifully stable at big speeds. However, there is far less tyre noise encroaching into the cabin and a long journey would be a much more pleasant experience than in the old car.

Nissan claim the GT-R Nismo, even though it has 592bhp (30bhp more), has the same 0-62mph time and top speed of the standard car.