Nissan GT-R review - The GT-R has never been more usable, yet it's still blisteringly fast - Nissan GT-R interior and tech

The cabin of the 2017 model will be familiar to those accustomed to the GT-R. There is a new, bigger infotainment screen, a new steering wheel and carbon on the transmission tunnel. There is also a new knob down near the bright red starter button that controls the satnav and radio and works much like BMW’s iDrive controller. 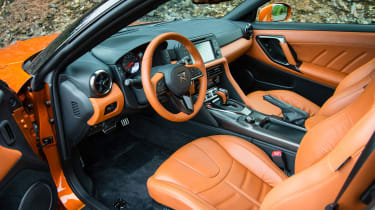 The GT-R’s column-mounted paddles have been replaced with ones attached to the back of the new steering wheel. We prefer the longer throw of the old versions, but that’s really just personal preference.

It still isn’t the sort of cabin that will delight aesthetes, but it brings everything up to date. Some extra leather makes it feels a bit less utilitarian, but the new larger infotainment screen feel less of an afterthought.

The Polyphony Digital- (studio behind Gran Turismo) are responsible for the GT-R's infotainment system and it still has a few tricks up its sleeve. It's nice to be able to customise the information it shows, choosing from things like yaw and g sensors as well as seeing boost pressure displayed while you drive.

The carbonfibre backed seats and Alcantara steering wheel in the GT-R Nismo do elevate its interior beyond the standard GT-R. However, it still doesn’t feel as though it matches its £150,000 price tag.