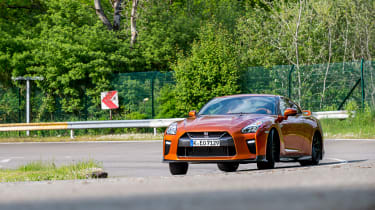 This is the biggest update to the R35 GT-R since it was launched back in 2007. There’s been a feeling that the GT-R has never really stood still in terms of development in those nine years, with constant tweaks and adjustments to software and set-up, not to mention gradual increases in power.

But this MY17 iteration has much bigger design changes, both outside and in, with a much-needed new infotainment system and a focus on reduced NVH. The aim has been to bring more performance but in a more mature package (the M in the M-Spec designation R34 GT-R stood for mature).

The bodywork tweaks are as much about cooling as aerodynamics. The aim was to get more air to the radiator without having a bigger grille and increasing the drag. Some of the fillips that we saw on the NISMO GT-R have made their way onto the standard car – the rear spats, for example, help to clean up the turbulence behind the car. The C-pillars have also been almost invisibly tweaked to smooth the airflow across them and as well as being aerodynamically adjusted in its shape, the new bonnet is also stiffer, meaning it deforms less at high speed. 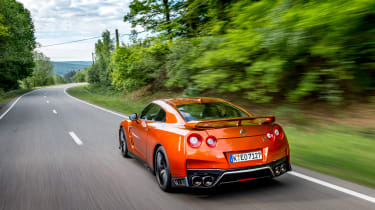 The engine (code VR38DETT) now produces 20bhp more at the top end thanks to an increase in boost pressure and an ignition timing system lifted from the NISMO GT-R. There is a new Titanium exhaust system, and underneath the car is a NACA on the undertray to help guide cool air towards the silencer.

The body structure has been given more stiffness around the windscreen to improve turn-in and this has been balanced by greater rigidity at the rear with reinforcement around the boot. Nissan claims a four per cent increase in speed through a slalom as a result.

After more time behind the wheel of the MY17 GT-R today I feel like my thoughts from yesterday (see page 2) have crystallised. The standard GT-R is definitely more of a GT car than it has ever been before, with greater habitability in everyday use on the road. It still sounds like a GT-R, but with the edges smoothed slightly and the volume turned down half a notch. It certainly still accelerates like a GT-R and if anything it feels slight stronger right up at the top of the rev-range, staying keen until all the rev-limiter lights are illuminated. Overtakes have rarely felt so easy. 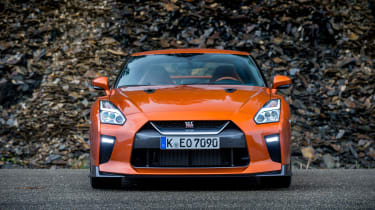 One notable indication that the standard MY17 GT-R has shifted its focus, is that it felt like the R setting was necessary when driving really hard on the road. Previously that would have been unthinkable, with the normal setting being plenty firm enough and the R setting useable only on a track. However, if you leave the Bilstein dampers in Normal, the car just feels a little floaty when you’re pushing on through compressions and over bumps.

As I said before, the interior is undoubtedly a more pleasant place to spend time and the materials all feel good quality, with the carbonfibre on the transmission tunnel looking particularly upmarket. The new paddles attached to the back of the steering wheel are fine. I prefer the longer throw of the old versions fixed to the steering column, but that’s really just personal preference.

So, the new GT-R feels more polished and easier to live with. It’s still freakishly quick on both road and track and it is still distinctively GT-R, but it feels a bit like the comfort model in the range. And this makes complete sense really, because where there used to be only one GT-R that had to do it all, there is now a model range of three, with this Standard car, the Track edition (which I assume will restore some of the chassis’ keen, edgy agility) and then the full-on Nismo all catering to the desires of different buyers. 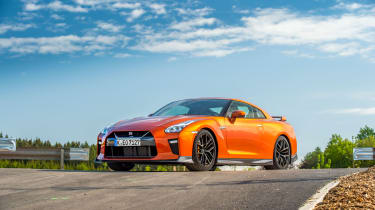 The MY17 GT-R will be available in three different trims, starting at £79,995 for the Pure spec, going up to £81,995 for the Recaro edition (surprise surprise, it comes with leather Recaro sports seats) then it’s £82,495 for the Prestige Black model topping out at £83,495 for the Prestige Red, Tan or Ivory trim. There will also be a Track edition with a carbon rear spoiler, enhanced body rigidity, 20-inch Rays alloys and uprated suspension and anti roll bars. This wasn’t on the launch, but will cost £91,995.

Nissan recommends 100RON fuel. Apparently 99RON may be used, but performance is slightly reduced. It’s also worth mentioning that there is a button above your right knee which can be pressed prior to start up for a quieter exhaust. Anything to keep the neighbours happy.

Find a used Nissan GT-R for sale on the Classic and Performance Car site.