Nissan GT-R review - The GT-R has never been more usable, yet it's still blisteringly fast - Nissan GT-R engine and gearbox

The 3799cc engine delivers its peak output of 562bhp at 6800rpm. With 466lb ft of torque available from 3600rpm the GT-R has a very strong mid-range, rather than a peaky top end, but the most advanced turbocharged performance engines now deliver their maximum torque from below 2000rpm.

The twin-turbo V6 does feel a touch sluggish from very low engine speeds, but from 2500rpm it starts to pull well. The two big turbochargers really make their presence felt from 3000rpm, though. From that point to the redline the GT-R feels ferociously fast in a straight line, accompanied by a distinct blast-furnace soundtrack.

No matter how often you drive a GT-R you never seem to grow accustomed to the violent manner in which it accelerates. 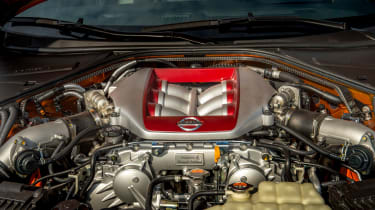 That sensation is aided by the six-speed twin-clutch gearbox and the unimpeachable traction of the four-wheel drive system. Upshifts are lightening quick, while the downshifts, accompanied by an automated throttle blip, come in fast and hard. The very latest dual-clutch transmissions might be even faster still, but the GT-R’s gearbox never feels out-dated when you use the column-mounted paddles. In automatic mode, though, the ‘box is a little less refined than the very best units.

The complex transmission – which features a rear transaxle, meaning drive is sent rearwards to the gearbox before being split between the front and back axles – used to grumble and chunter at low speed, but that's now been banished in Nissan's focus on NVH for the 2017 model.