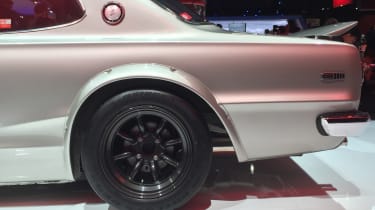 It was all about the GT-R on the Nissan stand at the New York auto show. To celebrate the unveiling of a significant facelift to the current R35 GT-R, Nissan had wheeled out a significant amount of GT-R heritage. The display of cars started with a 1969 Hakosuka. This first Skyline GT-R was known internally as KPGC10 (the four door was just PGC10) and it was wonderful seeing where various trademark features began including the iconic GT-R badge.

Next up was the KPGC110. Like its predecessor, this car belongs to a private collector who had kindly loaned it to Nissan for the show and it looked stunning. It is an extremely rare car as fewer than 200 were built. My favourite details are the four distinctive round taillights and the riveted-on arch extensions (I was talking to someone just the other day saying that it’s a shame you don’t see riveted arch extensions any more. A 993 GT2, for example, wouldn’t have been nearly as cool with beautifully smooth arches). 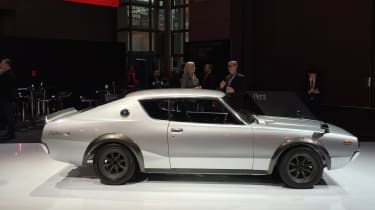 The 16-year gap in the GT-R story was even more obvious with them all gathered together, with the R32 looking radically different. All-wheel drive replaced rear-wheel drive, but a five-speed gearbox remained, as did a straight-six engine, albeit the turbocharged RB26 instead of the old naturally aspirated S20.  This was where the association with the Nurburgring also began, with the R32 setting a time of 8min22sec around the Nordschleife. 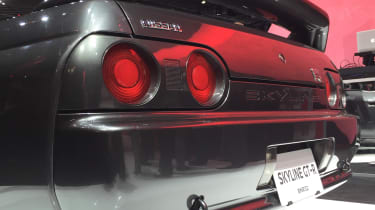 That obsession with those 13 miles of tarmac in Germany really kicked off with the next model, however. The R33 on display at the NYIAS was the very car that set the fabled 7min59sec lap time, with (apparently) just a roll cage differentiating it from a standard car. By the time the R34 came along in 1999, there were specific Nurburgring editions and the one shown in New York was an M-spec Nur from 2001 (only 250 were built). The M in M-spec was for Mizuno-san, the chief engineer of Nissan and the car featured special Ripple Control dampers and a smaller rear anti-roll bar. 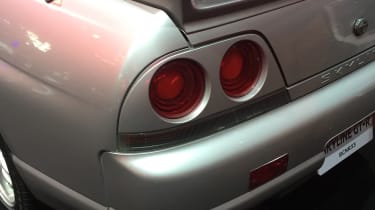 The Nur models (there was also a V-spec II Nur of which 750 were built), had a specially tuned N1 spec RB26 engine, with amongst other things, gold coloured head covers, upgraded injectors, new camshafts, improved engine mapping and increased boost. It could apparently reliably produce 500bhp although it left the factory putting out around 330bhp and due to Japanese laws it was advertised with just 276bhp... 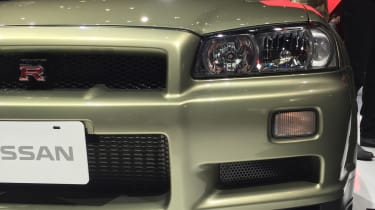 The Silica Brass exterior colour of the M-spec Nur R34 is pretty interesting, but it’s nothing compared to the final car in the line-up. The R35 Nismo with track options is a rare beast and the one on display was the camouflaged car used by Michael Krumm to set the stunning 7min8.679sec time around the Nordscheife in September 2013. The camouflage actually works remarkably well, disguising the aero extras like the small additions high up behind front wheel arches. Although it’s hard to see, the bonnet has also been signed numerous times in gold pen. 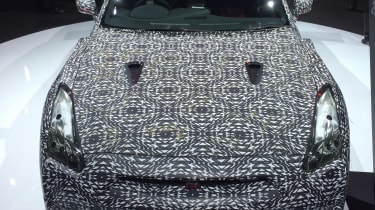 So, there we are; a remarkable history for a remarkable car and definitely the best stand at the New York International Auto Show. We’ll bring you a drive of the updated R35 just as soon as we can, and of course we’d love to know where you think the GT-R story will go next. Will the R36 be a Hybrid…?